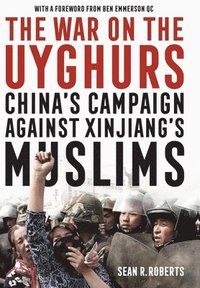 The War on the Uyghurs

av Sean R Roberts
(1 röst)  |  Läs 1 recension
Inbunden Engelska, 2020-09-08
250
Köp
Spara som favorit
Skickas inom 5-8 vardagar.
Gratis frakt inom Sverige över 159 kr för privatpersoner.
Finns även som
Visa alla 1 format & utgåvor
The first account of one of the world's most pressing humanitarian catastrophes. This eye-opening book reveals how China has used the US-led Global War on Terror as cover for its increasingly brutal suppression of the Uyghur people. China's actions, it argues, have emboldened states around the globe to persecute ethnic minorities and severely repress domestic opposition in the name of combatting terrorism. Within weeks of the September 11 attacks on New York and Washington, the Chinese government announced that it faced a serious terrorist threat from its largely Muslim Uyghur ethnic minority. Nearly two decades later, of the 11 million Uyghurs living in China today, more than 1 million have been detained in so-called re-education camps, victims of what has become the largest program of mass incarceration and surveillance in the world. Drawing on extensive interviews with Uyghurs in Xinjiang, as well as refugee communities and exiles, Sean Roberts tells a story that is not just about state policies, but about Uyghur responses to these devastating government programs. Providing a lucid and far-reaching analysis of China's cultural genocide, The War on the Uyghurs allows the voices of those caught up in the human tragedy to be heard for the first time. -- .
Visa hela texten

'This book should act as a wake-up call for policy-makers worldwide. Armed with the piercing and detailed analysis of the recent past in East Turkistan, and the graphic accounts of the present, no one has any further excuse for failing to grasp the full reality of the human tragedy that is taking place. Roberts de-mystifies the background, debunks the false excuses of the Chinese state, and presents the reality of the persecution unfolding before our eyes. None of us can afford to look away.' Ben Emmerson QC, Former UN Special Rapporteur on Counter-Terrorism 'Sean Roberts has done an immense service for all those who need to put headlines about Chinese repression of Uyghurs in recent years in proper context. Describing how the rhetoric and practices of the "Global War on Terror" since 2001 have led to the mass internment, persecution, and surveillance of the population, Sean Roberts shows that the Chinese campaign has chillingly aimed at nothing less than the destruction of Uyghur identity. This account is masterful, educational, and enraging by turns.' Samuel Moyn, Professor of Law and History, Yale University, and author of Not Enough: Human Rights in an Unequal World 'This is the back story behind one of the biggest stories in China - the incarceration of more than one million Uyghurs in a dystopian network of what are claimed to be reeducation camps. Who the Uyghurs are and how they came to be classified as terrorists is a story authoritatively told by Sean Roberts, who has spent three decades studying the Uyghurs and speaks the language. The publication of The War on the Uyghurs could not be more timely.' Barbara Demick, former Beijing bureau chief, Los Angeles Times, and author of Nothing to Envy 'In this highly readable account, Sean Roberts provides essential historical background to the Chinese Communist Party's "Cultural Revolution" against the Uyghurs. Distinguished by his ability to read and speak the Uyghur language, Roberts challenges global terrorism experts, who failed to interrogate the Chinese government assertion that it was combating an international terrorism threat not an anti-colonial struggle.' Lindsey Hilsum, Channel 4 News, author of In Extremis: the Life of War Correspondent Marie Colvin 'I first came across the Uyghurs in Guantanamo Bay, where they were guilty of no more than fleeing Chinese repression across the closest border into Afghanistan. It is a sad truth that our American "War on Terror" has given licence to repressive regimes around the world to behave even worse, as Sean Roberts lucidly describes in detailing the tragedy of the Uyghurs.' Clive Stafford Smith, Human Rights lawyer and founder of the charity Reprieve 'Sophisticated, nuanced, and deeply informed. Sean Roberts offers broad insights into the ways the 'Global War on Terror' has enabled authoritarian regimes around the world to repress minority populations.' Michael Clarke, Associate Professor, National Security College, ANU College of Asia and the Pacific, author of Xinjiang and China's Rise in Central Asia: A History 'Sean Roberts provides a comprehensive explanation for the current arbitrary mass detention of Uyghurs in China, an issue of global geopolitical significance. His book will likely become a standard reference for students on this topic.' Max Oidtmann, author of Forging the Golden Urn: The Qing Empire and the Politics of Reincarnation in Tibet 'A detailed, well-researched study of the ways in which the Xinjiang region in contemporary China has been linked with global terrorism by the central government, justifying extensive repressive measures. Sean Roberts offers a critique, and an indictment, of Beijing's approach. Sobering and thought-provoking.' Kerry Brown, Professor of Chinese Studies and Director, Lau China Institute, King's College London 'Giving voice to the Uyghurs themselves and drawing attention to this crisis, The War on the Uyghurs is striking, empathetic