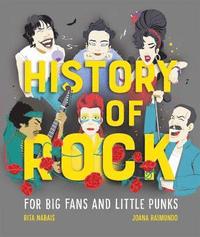 For Big Fans and Little Punks

av Rita Nabais
Inbunden Engelska, 2020-10-15
6-9 år
189
Köp
Spara som favorit
Finns även som
Visa alla 1 format & utgåvor
THE PERFECT CHRISTMAS GIFT FOR BIG MUSIC FANS AND LITTLE PUNKS. What are the greatest rock songs of all time? Who are the most famous musical legends? How can you become a rock star? From the rip-roaring rock and roll rhythms of the 1950s to the psychedelic anthems of the 21st century, discover the music that has moved our feet, touched our souls and mended broken hearts. Explore musical icons, their incredible stories, their chart-topping hits and the artistic movements influenced by the creative explosion of rock. Whether you're bonkers for Bowie, obsessed with Otis, mad about Mumford & Sons, passionate about Patti or crazy about Kurt, this is the perfect book for big fans, little punks and anyone who wants to learn what it really takes to be a rock star.
Visa hela texten

Rita is a music researcher with a Masters degree in English and American Culture. During her Masters, she specalised in Inter-Arts Studies (Cinema and Literature). Rita is also a teacher and a publisher. She has written and published chronicles and music critiques in various newspapers and music sites. In 2012, she co-founded the publishier Edicoes Escafandro. Here she coordinates and publishes books, and deals with the revision and organization of texts. In December 2017, she published in Portuguese the first-ever complete and illustrated history of rock music for children: "A Historia do Rock (para pais fanaticos e filhos com punkada)". This has now published in Sweden, and is due to publish in the US, Canada, Mexico and the UK. Joana is a published illustrator, animator and designer. She worked in Portugal and Italy after studying drawing and illustration in Barcelona, and has collaborated on several children's books, some of which became part of the official recommended books for children in Portugal.