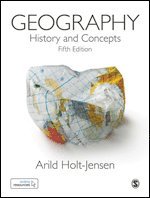 This text explores complex ideas in an intelligible and accessible style. Illustrated throughout with research examples and explanations in text boxes, questions for discussion at the end of each chapter and a concept glossary, this is the essential student companion to the discipline.
Visa hela texten

This comprehensive and accessible guide to the full breadth of Geography from an Anglophone perspective—from its beginnings to contemporary debates and from its biophysical to its cultural scholarship—is a must-read for geography undergraduates, but also for academics and interested laypeople encountering contemporary geography, excited by what’s going on, and keen to dig deeper.

This book should become a core text for all students getting to grips with either the history of geography or new ideas and theories in contemporary human geography. It is clear, comprehensive and intellectually stimulating.

Arild Holt-Jensen's 5th edition of his significantly re-written and refreshed Geography: History and Concepts is a major achievement as an accessible yet inspiring textbook. It pulls together in an intelligent way different strands of scientific theory, concepts and applications into applied research across geography over the millennia, centuries and decades up until to now. This is most useful to students on courses covering the history, philosophy and overall methodologies in geography at both undergraduate and also conversion Masters courses in geography (including for those moving from physical geography to human geography). This resource for students is necessary within the now much familiar fragmentation and (necessary) specialisation which researchers and much more advanced students are used to, as they at times now realise (again) that they - and our world around us -  misses geographers (and those from other social and physical disciplines) of different specialisms addressing grand societal and environmental challenges together.

The new edition of the volume is a very thoughtful and balanced book about the beauty of geography as an academic discipline. Holt-Jensen, as an old school geographer, explains in a very clever and intriguing way what geography is, what it can provide and finally how to think geographically, always referring to the roots of the discipline. If you’re looking to understand what geography is and what it has to offer, you’ll find the answers in here. Definitely a book that belongs in every student’s bookshelf and on every teacher’s desk.

The appearance of edition of Holt-Jensen’s book reconfirms its status within the anglophone strand of this texture, adding a Norwegian flavour and more mindful of the French and German threads than most other English language textbooks on geographical thought.

The book makes its case filled with a contagious excitement for the geographical profession. Additional to offering this fascinating geographical vista, the book does not l...

Arild Holt-Jensen (born 1937) is professor emeritus at Department of Geography, University of Bergen, Norway. He has been teaching geography in Bergen since 1965 and is the author of a number of books and articles on history and concepts of geography, environmental, urban and regional planning as well as general textbooks for highschool geography. Rewarded in 2000 Modeens Minnemedalj by the Finnish Geographical Society for achievements in geographical education. He has served as Department chair, member of University Senate, member of editorial board for GeoJournal, member of the Council in the Association of European Schools of Planning (AESOP) .

He has long experience in setting up and organising cross-disciplinary courses in environmental science and planning. His research in settlement geography, environmental, local and regional planning cover studies in Norway, the Nordic and Baltic countries. He has been guest professor at University of Washington, Seattle. He has lead a number of field courses for BA and MA students in Norway and the Baltic countries.

Holt-Jensen coordinated 2000-2004 the NEHOM (Neighbourhood Housing Models) project, financed by EU 5th framework programme, involving 11 partners in 8 European countries, which was followed up in the period 2004-2008 by  a Nordic - Baltic project financed by the Nordic Council of Ministers. One result of this project is (Holt-Jensen A and Pollock, E. (eds 2009): Urban Sustainablility and Governance; New Challenges for Nordic and Baltic Housing Policies. NOVA, New York.

From the start of his university studies he has been active in local and national politics:  as member of the Norwegian Liberal Party he headed its Environmental Commission 1968 1975 (national), was member of Bergen City Council 1971-1979 and later functioned as Chair of Lands City District board in 12 years. From 2004 he shifted to membership in Bergen Socialist (Labour) Party.