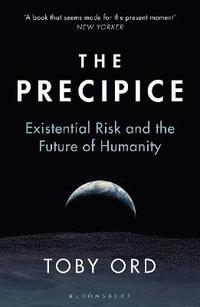 'A book that seems made for the present moment' New Yorker

av Toby Ord
(1 röst)  |  Läs 1 recension
Häftad Engelska, 2021-02-18
176
Köp
Spara som favorit
What existential threats does humanity face? And how can we secure our future? 'The Precipice is a powerful book . . . Ord's love for humanity and hope for its future is infectious' Spectator 'Ord's analysis of the science is exemplary . . . Thrillingly written' Sunday Times We live during the most important era of human history. In the twentieth century, we developed the means to destroy ourselves - without developing the moral framework to ensure we won't. This is the Precipice, and how we respond to it will be the most crucial decision of our time. Oxford moral philosopher Toby Ord explores the risks to humanity's future, from the familiar man-made threats of climate change and nuclear war, to the potentially greater, more unfamiliar threats from engineered pandemics and advanced artificial intelligence. With clear and rigorous thinking, Ord calculates the various risk levels, and shows how our own time fits within the larger story of human history. We can say with certainty that the novel coronavirus does not pose such a risk. But could the next pandemic? And what can we do, in our present moment, to face the risks head on? A major work that brings together the disciplines of physics, biology, earth and computer science, history, anthropology, statistics, international relations, political science and moral philosophy, The Precipice is a call for a new understanding of our age: a major reorientation in the way we see the world, our history, and the role we play in it.
Visa hela texten

Toby Ord is today's Carl Sagan. Clear and inspiring, this book leaves us hopeful for a flourishing human future -- Christine Peterson, co-founder of the Foresight Institute A powerfully argued book that alerts us to what is perhaps the most important - and yet also most neglected - problem we will ever face -- Peter Singer, author of 'Animal Liberation' and 'The Life You Can Save' The Precipice separates science from hype and will remain the definitive work on existential risk for a long time to come -- Max Tegmark, author of 'Life 3.0' and 'Our Mathematical Universe' A fascinating and persuasive guide to the most important topic of all: how our species will survive the risks we pose to our continued existence -- Stuart Russell, author of 'Human Compatible' and 'Artificial Intelligence: A Modern Approach' This book is a wake-up call to the existential threats of nuclear and biological weapons and the urgent need for action. A must-read that galvanises us to play a role in addressing these risks -- Angela Kane, former UN High Representative for Disarmament Affairs Humanity has never been more vulnerable - there's now a one-in-six chance that civilisation won't make it to the end of the century, argues a highly influential philosopher . . . Ord's analysis of the science is exemplary . . . Thrillingly written * Sunday Times * Many people have recently found that they want to read books offering the grandest perspectives possible on human existence, such as Sapiens . . . Toby Ord's new book is a startling and rigorous contribution to this genre that deserves to be just as widely read * Evening Standard * Splendid . . . The Precipice is a powerful book, written with a philosopher's eye . . . Ord's love for humanity and hope for its future is infectious * Spectator * Urgent and vaguely prophetic . . . In a year in which our everyday lives were upended by the unexpected (or rather the expected yet neglected), The Precipice is a good way to put everything in perspective -- Books of the Year * WIRED * The Precipice is a fascinating book, one that showcases both the knowledge of its author and his humanity * Axios * A book that seems made for the present moment * New Yorker * A story of the greatest risks to humanity's future, from the climate crisis and nuclear war to pandemics and artificial intelligence -- Highlights for 2020 * Guardian *

Toby Ord is a moral philosopher focusing on the big picture questions facing humanity. Born in Australia, he is a Senior Research Fellow at the Future of Humanity Institute at Oxford University. He is the founder of Giving What We Can and co-founder of the Effective Altruism movement, which has raised more than a hundred million pounds for some of the world's most deserving causes. In 2020, alongside Shonda Rimes, Kanye West and JK Rowling, he was included on the Financial Times's 'the good list', which highlights the work of the world's ten most inspiring philanthropists. He has also advised DeepMind, the World Health Organisation, the World Bank, the World Economic Forum, the US National Intelligence Council and the UK Prime Minister's Office, among others. He lives in Oxford.