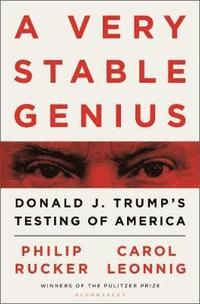 av Carol D Leonnig, Philip Rucker
Inbunden Engelska, 2020-01-21
271
Köp
Spara som favorit
Skickas inom 5-8 vardagar.
Gratis frakt inom Sverige över 159 kr för privatpersoner.
Finns även som
Visa alla 6 format & utgåvor
THE NUMBER ONE BESTSELLER 'It's all here in this stunning first draft of the history of the presidency of Donald Trump' Sydney Morning Herald 'An icy, Iago-like glimpse of the emotional and moral nullity that may be the source of Trump's power' Observer 'A damning, well-reported, well-sourced and clearly written haymaker' Sunday Times Drawing on nearly three years of reporting, hundreds of hours of interviews and more than two hundred sources, including some of the most senior members of the administration, friends and first-hand witnesses who have never spoken before, Philip Rucker and Carol Leonnig take us inside some of the most controversial moments of Trump's presidency. They peer deeply into Trump's White House - at the aides pressured to lie to the public, the lawyers scrambling to clear up norm-breaking disasters, and the staffers whose careers have been reduced to ashes - to paint an unparalleled group portrait of an administration driven by self-preservation and paranoia. Rucker and Leonnig reveal Trump at his most unvarnished, showing the unhinged decision-making and incompetence that has floored officials and stunned foreign leaders. They portray unscripted calls with Vladimir Putin, steak dinners with Kim Jong-un, and calls with Theresa May so hostile that they left her aides shaken. They also take a hard look at Robert Mueller, Trump's greatest antagonist to date, and how his investigation slowly unravelled an administration whose universal value is loyalty - not to country, but to the president himself. Grippingly told, A Very Stable Genius is a behind-the-scenes account of Trump's vainglorious pursuit of power in his first term.
Visa hela texten

Richly sourced and highly readable . . . Sheds new light on how the 45th president tests the boundaries of the office while trying the patience and dignity of those who work for or with him. It is not just another Trump tell-all or third-party confessional * Guardian * There's no doubt that Rucker and Leonnig have the goods. This book is a damning, well-reported, well-sourced and clearly written haymaker aimed at the 45th president, who has anointed it himself with angry tweets about "third-rate reporters" seeking to "demean" him . . . This playground bully, who somehow gained control of the nuclear codes, sprawls maniacally across every page of A Very Stable Genius * Sunday Times * Rucker and Leonnig present Trump as a lord of misrule who delights in instability, running a government that resembles "a virtual tilt-a-whirl" at a carnival . . . Like his boast about being able to shoot someone on Fifth Avenue with impunity, this is an icy, Iago-like glimpse of the emotional and moral nullity that may be the source of his power * Observer * A pacey read . . . Again and again you are reminded how uncouth Trump can be, but how effective too * The Times * They're meticulous journalists, and this taut and terrifying book is among the most closely observed accounts of Donald J. Trump's shambolic tenure in office to date . . . There aren't a lot of moments in A Very Stable Genius in which people do the right instead of the expedient thing * New York Times * Remains a page-turner even for those who chronicle Trump for a living. As with previous books on Trumpworld, it is the cumulative effect of what has happened in the Trump presidency, the reminder of outrage piled on outrage that shocks the conscience numbed by the daily drumbeat of Trump transgressions . . . Rucker and Leonnig have done us all a service * Financial Times * Superbly reported and written with clarity . . . It is the story of how Trump got rid of all the advisors - the so-called grown-ups in the room - who patronised him and tried to prevent him from doing what they considered to be stupid things. The authors have dislodged new sources who enable them to describe the thoughts and feelings of players like Tillerson, McMaster, Chief of Staff John Kelly, Deputy Attorney General Rod Rosenstein and others . . . Rucker and Leonnig offer lots of gory details about the president. He blusters about, desperately solipsistic, relentlessly ignorant. His gaffes are breathtaking * Washington Post * Walks readers step by step through the first 30 months or so of a presidency like no other . . . Whatever may happen to that impeachment effort in the weeks and months ahead, it creates a moment of intermission in the Trump saga and a chance to consider how the landscape has already been altered by this president. A Very Stable Genius offers a harrowing companion narrative to be read during intermission * NPR * An arresting narrative of how Trump has come to operate with far fewer constraints and much greater conviction about the soundness of his own instincts * New Yorker * Compulsively readable * TLS * Rucker and Leonnig set out to provide an historical record of Trump's administration . . . Their account is certainly more meticulous and less gossipy than Michael Wolff's Fire and Fury . . . We get an excellent sense of the man as President . . . Rucker and Leonnig don't tell us what to think of Trump, but by the end I had a long list of adjectives to describe him: obtuse, capricious, immature, narcissistic, naive, impetuous, ignorant * The Herald *

Carol Leonnig is a national investigative reporter at the Washington Post, where she has worked since 2000 and covers Donald Trump's presidency and other subjects. She won the 2015 Pulitzer Prize for her reporting on security failures and misconduct inside the Secret Service. She also was part of the Post teams awarded Pulitzers in 2017, for reporting on Russia's interference in the 2016 presidential election, and in 2014, for revealing the U.S. government's secret, broad surveillance of Americans. Philip Rucker is the White House Bureau Chief at the Washington Post, leading its coverage of President Trump and his administration. He and a team of Post reporters won the Pulitzer Prize and George Polk Award for their reporting on Russia's interference in the 2016 presidential election. Rucker joined the Post in 2005 and previously has covered Congress, the Obama White House and the 2012 and 2016 presidential campaigns.