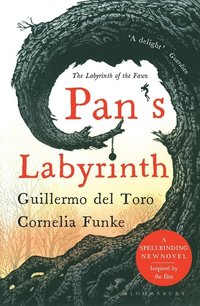 The Labyrinth of the Faun

av Guillermo Del Toro, Cornelia Funke
Häftad Engelska, 2020-07-09
137
Köp
Spara som favorit
Finns även som
Visa alla 1 format & utgåvor
THE SUNDAY TIMES AND NEW YORK TIMES BESTSELLER This enthralling novel, inspired by the 2006 film, illustrates that fantasy is the sharpest tool to explore the terrors and miracles of the human heart You shouldn't come in here. You could get lost. It has happened before. I'll tell you the story one day, if you want to hear it. In fairy tales, there are men and there are wolves, there are beasts and dead parents, there are girls and forests. Ofelia knows all this, like any young woman with a head full of stories. And she sees right away what the Capitan is, in his immaculate uniform, boots and gloves, smiling: a wolf. But nothing can prepare her for the fevered reality of the Capitan's eerie house, in the midst of a dense forest which conceals many things: half-remembered stories of lost babies; renegade resistance fighters hiding from the army; a labyrinth; beasts and fairies. There is no one to keep Ofelia safe as the labyrinth beckons her into her own story, where the monstrous and the human are inextricable, where myths pulse with living blood ...
Visa hela texten

Funke's sensitive expansion of Del Toro's dark fantasy is a delight * Guardian * More than just a film spin off , this is a beautiful companion piece and a reminder of the importance of Del Toro's initial vision * Observer * A work of consummate love and passion, one that needs to be revered for its unmistakable brilliance ... This novelisation not only lives up to impossibly high expectations but incredibly adds to the darkest of magical fairytales * Starburst * Inspired and beautifully illustrated * i Paper * Pan's Labyrinth is a terrific masterpiece, a literary accomplishment that reaches and often rivals its cinematic counterpart * Storgy * Reading this is a wonderful re-exploration of a beautiful and terrifying world, merging the horrors of reality and the wonders of fantasy just as well as the film did, if not better * Cultured Vultures * Not only is this book a fantastic retelling of the film, but it is also a beautifully written expansion that dives into del Toro's mythology in a way that the film couldn't ... Harsh, poetic, and visually stunning * Fan Fest * Charged with the monumental task of adapting an intricate film to the page, del Toro and Funke have avoided merely describing the film and instead have elegantly recrafted the narrative ... Dark and mesmerising * Kirkus Reviews, starred review * Funke maintains the tale's dark beauty, filling it with imaginative details, complex characters, love and history, as well as humanity's evils ... This book will creep into the minds and hearts of readers and linger there * Booklist *

Cornelia Funke is an award-winning children's author. Her books have been translated from German into 35 different languages, and include Inkheart, Inkspell, Inkdeath, The Thief Lord, Dragonrider and the Reckless series. A film adaptation of The Thief Lord came out in 2006 and the Hollywood production of Inkheart was released in 2008. Cornelia lives in Malibu, California. Guillermo del Toro is a Mexican film director, screenwriter, producer, and novelist. In his career, del Toro has alternated between Spanish-language dark fantasy pieces, such as The Devil's Backbone and Pan's Labyrinth, and more mainstream American action films, such as Blade II, Hellboy and Pacific Rim. His 2017 film The Shape of Water won the Academy Award for Best Picture in 2018. Del Toro also received an Academy Award for Best Director, as well as the Golden Globe, BAFTA, Critics' Choice, and Directors Guild of America.