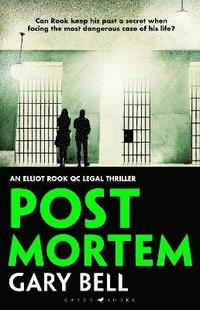 av Gary Bell
Inbunden Engelska, 2021-01-07
169
Köp
Spara som favorit
Kan levereras innan julafton!
Finns även som
Visa alla 4 format & utgåvor
Can Rook keep his criminal past a secret when facing the most dangerous case of his life? Thirteen men have died in a London prison. Barrister Elliot Rook QC, who risks losing everything if his secret criminal past is revealed, must defend Charli Meadows, the vulnerable single mother accused of smuggling the deadly tainted drugs inside. But just as Rook becomes suspicious of those closest to Charli, a note arrives at his flat - threatening violence if the trial is not called off. While Rook battles to defend Charli and protect himself, his young protege Zara Barnes is fighting for her livelihood. In a few short weeks, only one tenancy at the legal chambers will be available to the ever-multiplying mass of pupils. Determined to make it hers, Zara takes on her biggest solo case yet. But will her gamble pay off? Praise for the Elliot Rook QC series: '[A] thriller I found hard to put down' - Observer 'Slick and wonderfully paced, I was hooked from the opening pages. One of the best legal thrillers I have read recently, it reminded me of early Grisham' - AMW Books Blog 'A brilliant read' - A. N. Wilson, Tablet
Visa hela texten

The court scenes bristle with authenticity. Throughout, I had flashbacks to my time at the bar. And Rook is a compelling creation. Intrepid, irreverent and ingenious. I'm a follower. -- John Fairfax It's very well done - crackles with authenticity and warmth in the relationship between Rook and Zara. Rumpole of the Bailey dusted off and brought firmly up to date for the twenty first century. -- Harriet Tyce Post Mortem is brilliant in the court room and inventive -- Paul Burke * Crime Time *

Born the son of a coal miner, Gary Bell QC left school without any qualifications and drifted in and out of a number of jobs before being convicted of fraud aged eighteen. He then spent two years penniless and homeless in Europe, before returning to his studies aged twenty-one and, after seven years, became a barrister. He has spent the last thirty years at the Bar, becoming a QC in 2012. He specialises in defending major fraud and murder trials.