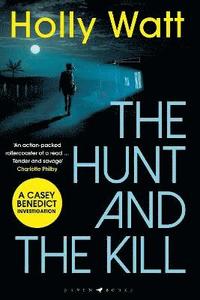 The Hunt and the Kill

save millions of lives... or save those you love most

av Holly Watt
Inbunden Engelska, 2021-07-08
159
Köp
Spara som favorit
Kan levereras innan julafton!
Finns även som
Visa alla 2 format & utgåvor
*A TIMES THRILLER OF THE MONTH* 'Heir to John le Carre' The Times 'Casey is fierce, obsessive and brilliant' Observer 'An action-packed rollercoaster of a read ... From the first twist to the heart-thumping finale, I was on the edge of my seat' Charlotte Philby, author of The Second Woman Save millions of lives... or save those you love most When acclaimed undercover journalist Casey Benedict is asked to interview a young woman with cystic fibrosis, the patient's doctor alerts her to the looming threat of antibiotic-resistant infections, tipping her off about a potential new wonder drug. If the rumours are true, this new antibiotic could save millions of lives, but no one wants to admit that the drug even exists. As Casey investigates, she follows the trail from the Maldives to a game reserve in Zimbabwe, using her undercover skills to probe the truth and find out why the discovery of this new drug is being covered-up. When tragedy unexpectedly strikes, Casey suspects that someone is trying to silence her, but she is not prepared to let the story drop, no matter how much danger she - or those she loves most - are put in. A searing, page-turning, pulse-racing thriller that sees Casey on a hunt around the globe as she pursues a major expose into pioneering medical research and drugs that could change the world. For fans of Mare of Easttown, Erin Brockovich, Mick Herron, Charlotte Philby and John le Carre. 'In the gutsy Casey, [the author] has created an unstoppable yet entirely credible modern heroine... Much of John le Carre's work was steered by his moral compass. Why should his heir be a man?' The Times The Hunt and the Kill is the third book by Holly Watt featuring Casey Benedict.
Visa hela texten

She's on top form ... deftly mixing old-fashioned derring-do (characteristically, the secret files Benedict hunts for are paper ones) with an urgent investigation of cutting-edge medicine * Sunday Times * The Hunt and the Kill is a terrific blend of old-school adventure and the thriller-with-a-conscience that has become Holly Watt's signature ... In the gutsy Casey she has created an unstoppable yet entirely credible modern heroine... Much of John le Carre's work was steered by his moral compass. Why should his heir be a man? * The Times * [Holly's] affection for the weird world of newspapers comes through strongly, as does the sense that her plot is at least in part inspired by some of the stories and rumours she failed to stand up as a reporter - lucky us that she has decided to give them a new life as fiction * Evening Standard * Watt writes with sparky intelligence * Literary Review * A fine alchemical mix of great storytelling, strong characters and zeitgeisty themes ... The Hunt and the Kill is a superior adventure, gritty and grounded, with bags of atmosphere and plenty to think about ... Intelligent, pacy and ripped from the news * NB Magazine * A page-turning thriller that hooks you in right from the start ... Casey Benedict is just such a refreshing character - there are so few books that focus on a strong, brave, determined woman and she is all that and more. Properly Intelligent, impeccably researched and utterly gripping - we can't wait for the next -- Ellery Lloyd I adore the Casey Benedict series and this instalment is an action-packed rollercoaster of a read that is in turn tender and savage, and written with the insider knowledge of someone who truly understands the world of undercover reporting. From the first twist to the heart-thumping finale, I was on the edge of my seat and unable to look away -- Charlotte Philby A taut, compelling, brilliant thriller that once again throws the reader into the dangerous and wonderful world of Casey Benedict. Totally engaging -- Gytha Lodge Not straight espionage, but, like later le Carre, guided by moral imperatives, and the combination of a gutsy female protagonist with adventure scenarios is a savvy one -- Heirs to le Carre * The Times *

Holly Watt is an award-winning investigative journalist who worked at the Sunday Times, the Daily Telegraph and the Guardian. Her first novel, To The Lions, won the CWA Ian Fleming Steel Dagger, and was followed in the Casey Benedict series by The Dead Line, which has been longlisted for the 2021 CWA Steel Dagger. The Hunt and the Kill is her third novel. @holly_watt