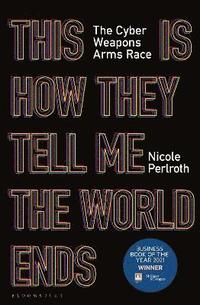 This Is How They Tell Me the World Ends

WINNER OF THE FT & McKINSEY BUSINESS BOOK OF THE YEAR AWARD 2021 The instant New York Times bestseller A Financial Times and The Times Book of the Year 'A terrifying expose' The Times 'Part John le Carre . . . Spellbinding' New Yorker We plug in anything we can to the internet. We can control our entire lives, economy and grid via a remote web control. But over the past decade, as this transformation took place, we never paused to think that we were also creating the world's largest attack surface. And that the same nation that maintains the greatest cyber advantage on earth could also be among its most vulnerable. Filled with spies, hackers, arms dealers and a few unsung heroes, This Is How They Tell Me the World Ends is an astonishing and gripping feat of journalism. Drawing on years of reporting and hundreds of interviews, Nicole Perlroth lifts the curtain on a market in shadow, revealing the urgent threat faced by us all if we cannot bring the global cyber arms race to heel.
Visa hela texten

An intricately detailed, deeply sourced and reported history of the origins and growth of the [cyberweapons] market and the global cyberweapons arms race it has sparked . . . This is no bloodless, just-the-facts chronicle. Written in the hot, propulsive prose of a spy thriller, Perlroth's book sets out from the start to scare us out of our complacency . . . Perlroth comes at the reader hard, like an angry Cassandra who has spent the last seven years of her life unmasking the signs of our impending doom - only to be ignored again and again . . . A strong, data-driven case for action -- Jonathan Tepperman * New York Times * Perlroth is a longtime cybersecurity reporter for the New York Times, and her book makes a kind of Hollywood entrance . . . Perlroth's storytelling is part John le Carre and more parts Michael Crichton - 'Tinker, Tailor, Soldier, Spy' meets 'The Andromeda Strain'. Because she's writing about a boys' club, there's also a lot of 'Fight Club' in this book . . . And, because she tells the story of the zero-day market through the story of her investigation, it's got a Frances McDormand 'Fargo' quality, too . . . Spellbinding -- Jill Lepore * New Yorker * When the weaknesses of a system can be bought and sold, the results can be calamitous, as This Is How They Tell Me the World Ends shows . . . Engaging and troubling . . . This secretive market is difficult to penetrate, but Perlroth has dug deeper than most and chronicles her efforts wittily * Economist * A terrifying expose of the black market in software bugs . . . Perlroth's insider accounts provide texture and context that was often missing from news coverage at the time. Storytelling skills honed in her work as a New York Times reporter specialising in cybersecurity make them scarier, particularly because of the collateral damage . . . Yet the thrust of her commendably thorough and determined research is not the damage done, but the market in mayhem that underpins it . . . Perlroth does an admirable job in stripping away the jargon * The Times * A stemwinder of a tale of how frightening cyber weapons have been turned on their maker, and the implications for the world when everyone and anyone can now decimate everyone else with a click of a mouse . . . Perlroth takes a complex subject that has been cloaked in opaque techspeak and makes it dead real for the rest of us. You will not look at your mobile phone, your search engine, even your networked thermostat the same way again -- Kara Swisher, co-founder of Recode and New York Times opinion writer Nicole Perlroth has written a dazzling and revelatory history of the darkest corner of the internet, where hackers and governments secretly trade the tools of the next war . . . This Is How They Tell Me the World Ends is a rollicking fun trip, front to back, and an urgent call for action before our wired world spins out of our control. I've covered cybersecurity for a decade and yet paragraph after paragraph I kept wondering: 'How did she manage to figure *that* out? How is she so good?'" -- Garrett M. Graff, author of 'The Only Plane in the Sky' The definitive history of cyberwarfare. Nicole Perlroth connects the dots and the behind the scenes action of every serious intrusion, cyberattack and cyberespionage revelation in the last decade -- Clint Watts, author of 'Messing With The Enemy' A must-read tale of cloak-and-dagger mercenary hackers, digital weapons of mass destruction and clandestine, ne'er-do-well government agencies -- Lawrence Ingrassia, author of 'Billion Dollar Brand Club' Usually, books like this are praised by saying that they read like a screenplay or a novel. Nicole Perlroth's is better: her sensitivity to both technical issues and human behavior give this book an authenticity that makes its message - that cybersecurity issues threaten our privacy, our economy, and maybe our lives - even scarier -- Steven Levy, author of 'Hackers and Facebook' An essential cautionary tale [that] exposes the m

Nicole Perlroth covers cybersecurity for the New York Times. She is the recipient of several journalism awards including best technology reporting by the Society of Business Editors and Writers. Her 2014 Times profile of security blogger Brian Krebs was optioned by Sony Pictures and a 2016 story of Chinese hackers in a welding shop server was optioned for a television series. Prior to joining the New York Times in 2011, she covered venture capital and start-ups for Forbes Magazine. She is a guest lecturer at the Stanford Graduate School of Business and lives in Los Angeles.