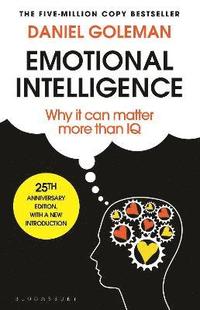 av Daniel Goleman
Häftad Engelska, 2020-12-08
136
Köp
Spara som favorit
Finns även som
Visa alla 1 format & utgåvor
A 25th anniversary edition of the number one, multi-million copy international bestseller that taught us how emotional intelligence is more important than IQ - 'a revolutionary, paradigm-shattering idea' (Harvard Business Review) Featuring a new introduction from the author Does IQ define our destiny? In his groundbreaking bestseller, Daniel Goleman argues that our view of human intelligence is far too narrow. It is not our IQ, but our emotional intelligence that plays a major role in thought, decision-making and individual success. Self-awareness, impulse control, persistence, motivation, empathy and social deftness: all are qualities that mark people who excel, whose relationships flourish, who can navigate difficult conversations, who become stars in the workplace. With new insights into the brain architecture underlying emotion and rationality, Goleman shows precisely how emotional intelligence can be nurtured and strengthened in all of us.
Visa hela texten

'An impressive argument that excellence is more than IQ' * Daily Mail * 'A well-written and practical guide to the emotions, perfectly pitched in tone and scope' * Financial Times * 'Forget IQ. Brains may come in useful, as may social class and luck, but as a predictor of who will succeed in any area of life, EQ is the thing to worry about' * Good Housekeeping *

DANIEL GOLEMAN is an internationally known psychologist. As a science journalist Goleman reported on the brain and behavioural sciences for the New York Times for many years. His international bestseller, Emotional Intelligence, has sold more than five million copies worldwide and has been translated into over forty languages. Goleman's work as a science journalist has been recognised with many awards, including a Lifetime Career Award from the American Psychological Association, and he was made a Fellow of the American Association for the Advancement of Science in recognition of his communicating science to the general public. He has been named one of the world's most influential business thinkers by the Financial Times and the Wall Street Journal. Goleman is a co-founder of the Collaborative for Academic, Social, and Emotional Learning, originally at the Yale Child Studies Center, and he currently co-directs the Consortium for Research on Emotional Intelligence in Organizations at Rutgers University. Besides his books on emotional intelligence, Goleman has written books on topics including self-deception, creativity, transparency, meditation, social and emotional learning, ecoliteracy and the ecological crisis. He lives in Massachusetts.