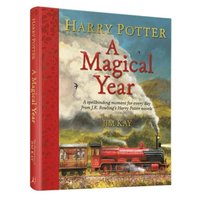 The Illustrations of Jim Kay

av J K Rowling
Inbunden Engelska, 2021-10-05
230
Köp
Spara som favorit
A Magical Year takes readers on an unforgettable journey through the seasons at Hogwarts. Jim Kay's incredible illustrations, paired with much loved quotations from J.K. Rowling's Harry Potter novels, bring to life all of the magic, beauty and wonder of the wizarding world. This is an irresistible gift book for anyone who has ever been captivated by the Boy Who Lived. Each day features a favourite anniversary or meaningful memory from the Harry Potter novels. All around, Jim Kay's scenic artwork and decorative painter's marks bring that moment to life in breathtaking detail. His unique interpretation is both captivating and transporting - picture frozen icicles glinting on the snowy towers of Hogwarts, the dancing eyes of Professor Albus Dumbledore, or the infectious hustle and bustle of Diagon Alley. Inside, a selection of his most iconic illustrations are joined by previously unseen pencil sketches and preparatory pieces, offering a unique and fascinating insight into the artist's sketchbook. Jim Kay's dazzling depiction of the wizarding world has been enchanting readers since the publication of the groundbreaking Illustrated Edition of Harry Potter and the Philosopher's Stone in 2015. Now, as he continues to illustrate the stories, both lifelong fans and new readers can explore that world further. The Kate Greenaway Medal winner's bewitching character studies, sweeping landscapes and beautifully observed pencil details reveal the skill and process of an artist working at the peak of his powers. This is the perfect gift to give at birthdays and Christmas, to share at bedtime or to make a friend smile. A Magical Year brings together Harry, Ron, Hermione and a host of other beloved characters in a glorious illustrated compendium that readers everywhere will cherish for years to come.
Visa hela texten

J.K. Rowling is best known as the author of the seven Harry Potter books, which were published between 1997 and 2007. The enduringly popular adventures of Harry, Ron and Hermione have gone on to sell over 500 million copies, be translated into over 80 languages and made into eight blockbuster films. Alongside the Harry Potter series, she also wrote three short companion volumes for charity: Quidditch Through the Ages and Fantastic Beasts and Where to Find Them, in aid of Comic Relief and Lumos, and The Tales of Beedle the Bard, in aid of Lumos. J.K. Rowling collaborated with playwright Jack Thorne and director John Tiffany to continue Harry's story in a stage play, Harry Potter and the Cursed Child, which opened in London in 2016 and is now playing worldwide. In the same year, she made her debut as a screenwriter with the film Fantastic Beasts and Where to Find Them, the first in a series featuring Magizoologist Newt Scamander, which was inspired by the original companion volume. J.K. Rowling has also written a standalone novel, The Casual Vacancy, and is the author of the Strike crime series under the pseudonym Robert Galbraith. Both have been adapted for television. In 2020 J.K. Rowling returned to publishing for younger children with the fairy tale The Ickabog, the royalties from which she is donating to groups affected by the Covid-19 pandemic. She has received many awards and honours, including an OBE and a Companion of Honour for services to literature and philanthropy. She lives in Scotland with her family. Jim Kay won the Kate Greenaway Medal in 2012 for his illustrations in A Monster Calls by Patrick Ness. He studied illustration at the University of Westminster, and worked in the Library & Archives of Tate Britain and then as an assistant curator of botanical illustrations at the Royal Botanic Gardens at Kew before returning to producing art full-time. After a one-man exhibition at Richmond Gallery he was approached by a publisher and his freelance career began. Alongside his illustration work, Jim has produced concept work for film and television, and contributed to the group exhibition Memory Palace at the V&A Museum in London. The Illustrated Edition of Harry Potter and the Philosopher's Stone was published to international acclaim. Bloomsbury has commissioned Jim to illustrate all seven books in J.K. Rowling's classic series. Jim lives and works in Sussex with his wife.