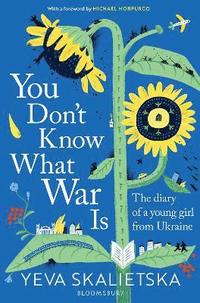 You Don't Know What War Is

The Diary of a Young Girl From Ukraine

av Yeva Skalietska
Häftad Engelska, 2022-10-25
9-12 år
146
Köp
Spara som favorit
Finns även som
Visa alla 1 format & utgåvor
***A SUNDAY TIMES BOOK OF THE YEAR*** Featured on This Morning, Steph's Packed Lunch, Radio 4: Today and Channel 4 News Everyone knows the word 'war'. But very few understand what it truly means. When you find you have to face it, you feel totally lost, walled in by fright and despair. Until you've been there, you don't know what war is. This is the gripping and moving diary of young Ukrainian refugee Yeva Skalietska. It follows twelve days in Ukraine that changed 12-year-old Yeva's life forever. She was woken in the early hours to the terrifying sounds of shelling. Russia had invaded Ukraine, and her beloved Kharkiv home was no longer the safe haven it should have been. It was while she was forced to seek shelter in a damp, cramped basement that Yeva decided to write down her story. And it is a story the world needs to hear. Yeva captured the nation's heart when she was featured on Channel 4 News with her granny as they fled Ukraine for Dublin. In You Don't Know What War Is, Yeva records what is happening hour-by-hour as she seeks safety and travels from Kharkiv to Dublin. Each eye-opening diary entry is supplemented by personal photographs, excerpts of messages between Yeva and her friends and daily headlines from around the world, while three beautifully detailed maps (by Kharkiv-native Olga Shtonda) help the reader track Yeva and her granny's journey. You Don't Know What War Is is a powerful insight into what conflict is like through the eyes of a child and an essential read for adults and older children alike. Published in association with UNHCR, the UN Refugee Agency, with a foreword by Michael Morpurgo. 'Everyone, absolutely everyone, should read it. You will love Yeva.' Christy Lefteri, No.1 international bestselling author of The Beekeeper of Aleppo 'Yeva speaks a truth all of us must listen to' Michael Morpurgo, award-winning author of War Horse 'Exhilarating, shattering, heartbreaking, brilliant' Roddy Doyle, Booker Prize-winning author 'The most important story of our times' Viv Groskop, podcaster and writer 'A herstory of Ukraine' Olia Hercules, Ukrainian chef and food writer
Visa hela texten

Yeva speaks a truth that all of us, young and old, must listen to. -- Michael Morpurgo, author of War Horse The most important story of our times told from the inside by the best narrator: a wise twelve-year-old girl. -- Viv Groskop, comedian, writer and podcaster This book has touched my heart in a way that I am finding hard to put into words. Everyone, absolutely everyone, should read it. You will love Yeva. -- Christy Lefteri, No.1 international bestselling author of The Beekeeper of Aleppo This is one of those extraordinary books that will haunt readers for a very long time. * Irish Times * [A] heartbreaking revelation of war through a child's eyes. * Telegraph * This is the eloquently written and important hour-by-hour account of what happened on and after February 24, 2022, when Yeva Skalietska woke up to the sound of explosions in her home town of Kharkiv, near Ukraine's Russian border. She had just turned 12 and had lived an ordinary, happy life until that moment. Her diary tells of the days of taking refuge in basements, then fleeing to western Ukraine and Hungary before she and her grandmother found safety and a new home in Dublin. The book has contributions from some of Yeva's friends who are still in Ukraine, and is a rare and moving chronicle of war from the point of view of children. * The Sunday Times * This is an important book - a recording of history written by Yeva, a young person, whose words and feelings reflect so many who rarely get an opportunity to be heard. A herstory of Ukraine for posterity. -- Olia Hercules, Ukrainian chef and food writer Yeva is a young Ukrainian girl and this is her diary. It starts on February 14, her 12th birthday, and chronicles her flight from war alongside her grandmother, ending up in Ireland. It's written with honestly and heart, and gives an important child's eye view of war. Children's books: 56 cracking reads to keep kids entertained this Christmas * Irish Independent * The heart-stopping account of the war in Ukraine, You Don't Know What War Is by 12-year-old Yeva Skalietska, who escaped to Ireland, is a vital read by everyone. Teenage page-turners * Irish Independent on Sunday * I wish Yeva Skalietska hadn't felt the need to write this book but I'm glad that she did write it - because it is exhilarating, shattering, heartbreaking, brilliant. It's an extraordinary book. -- Roddy Doyle, Booker Prize-winning author Yeva's diary allows the reader to experience war through the eyes of a child and her story will endure long after this terrible war ends. * Lord Alf Dubs, refugee rights campaigner * I'll never forget the first time Yeva read extracts from her diary to me in a refugee shelter at the start of the full-scale war. With this book, we all get that privilege. -- Paraic O'Brien, Channel 4 News reporter It resonates beyond the particular to convey what it means to lose everything suddenly, the horror of bombardment and the need to make those who run from danger safe. * The Sunday Times * Powerful and poetic, this beautiful book shows the very worst and the very best of humanity. Essential reading. -- Katya Balen, Carnegie Medal-winning author Many children need to process the times they are living in too, however, in age-appropriate ways. Older readers might relate to a first-hand account by Ukrainian Yeva Skalietska. You Don't Know What War Is (Bloomsbury) traces the 12-year-old's journey from happy normality through tumult, traversing western Ukraine and Hungary to find safety in Dublin * The Observer * Skalietska's story, told in the format of a personal diary, brings the horror of war into sharper focus than a dispassionate news report ever could...most reader won't know first-hand what war is - but thanks to accounts like hers, we are reminded how precious that ignorance is. * The Big Issue *

Yeva is a 12-year-old Ukrainian girl who grew up living with her granny in Kharkiv, near the Russian border. She loves learning languages, bowling, playing the piano and painting. Yeva wrote a diary of her experiences of fleeing war in Ukraine. She now lives in Dublin, Ireland where she has made new friends and had a go at Irish dancing, but is always missing home.