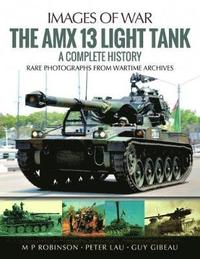 av M P Robinson, Peter Lau, Guy Gibeau
(1 röst)
Häftad Engelska, 2018-12-12
219
Köp
Spara som favorit
Skickas inom 5-8 vardagar.
Gratis frakt inom Sverige över 159 kr för privatpersoner.
Finns även som
Visa alla 2 format & utgåvor
The AMX 13 was originally designed in the immediate aftermath of the Second World War. It represents French ambitions for national resurgence and withdrawal from wartime dependence on American military technology. Being a light tank it was an ambitious and far sighted departure from conventional tank design and it found a ready export market as well as being a critical part in the French Army arsenal. Its basic hull design lent itself to the development of a vast list of variants. French designers progressively modernised, and indeed reinvented, the AMX13 and enabled it to claim to be one of the most successful armoured vehicle programmes of the post-war period. It proved its worth in numerous small wars worldwide in the service of many countries. This, the first commercially published work on the AMX13 in English, examines in detail the technical industrial and tactical story of this remarkably successful armoured fighting vehicle. The authoritative text is backed by an impressive selection of images
Visa hela texten

MP Robinson is a Canadian military historian whose research is focused on Cold War era armoured and mechanized warfare. He has co-authored (with Rob Griffin) two previous titles for Pen and Sword Military; Challenger 2- The British Main Battle Tank and The Royal Armoured Corps in the Cold War. Peter Lau is a Product Manager responsible for the life cycle support of a main battle tank. He has served in an armoured battalion in the Singapore Army and is the author of two books on the AMX13 Mle 51 Light Tank. The late Lieutenant-Colonel Guy Gibeau was a mechanized infantry officer whose career in the French Army spanned four decades. Much of his early career was spent in command of AMX13 series vehicles, and he was one of France's foremost experts on the type. He died in 2017.