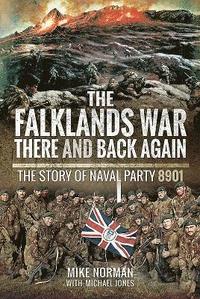 The Falklands War There and Back Again

av Mike Norman, Michael Jones
Inbunden Engelska, 2018-05-01
279
Köp
Spara som favorit
Skickas inom 5-8 vardagar.
Fri frakt inom Sverige för privatpersoner.
Finns även som
Visa alla 1 format & utgåvor
On 1 April 1982 Major Mike Norman, commander of Naval Party 8901, was looking forward to a peaceful year-long tour of duty on the Falkland Islands. But events turned out differently, for the next day the Argentinians invaded and he and his small Royal Marines garrison found themselves fighting for their lives. They took up defensive positions in and around Government House and on the approaches to Stanley to protect the Governor, Rex Hunt, and delay the enemy's advance. They were prepared to die executing these orders. After a desperate battle against vastly superior numbers, Hunt ordered them to lay down their arms. As the surrender took place, an Argentinian told a Marine: `The Islands are ours now'. The response was simple: `We will be back'. They were, and this is their story. The Royal Marines of Naval Party 8901 volunteered to join the Task Force and, some seventy-five days after the invasion, the men who were forced to watch the raising of the Argentine flag over the Islands were able, in return, to proudly run up the Falklands flag once more at Government House. Mike Norman and Michael Jones's dramatic account draws upon Norman's vivid recollections, the log book and action reports of the defence of Government House and Stanley, the testimony of Marines under Mike Norman's command and recently released government archives. It is a powerful and moving tribute to men who confronted the Argentinian invaders and then fought to regain the Falklands.
Visa hela texten

Major Mike Norman joined the Royal Marines in 1962 and served for thirty years, spending much of his time in commando units or training establishments. In 1982 he was appointed commanding officer of Naval Party 8901, the Royal Marines detachment which was stationed in the Falkland Islands when the Argentinians invaded. He organized the resistance until he was ordered to stop fighting, then returned to the UK. When 3 Commando Brigade landed at San Carlos on 21 May to retake the islands he commanded the newly formed J Company in 42 Commando and was in Stanley to see the Argentinian surrender. Michael Jones is a fellow of the Royal Historical Society, a member of the British Commission for Military History and the author of twelve books ranging from the Middle Ages to the Second World War.