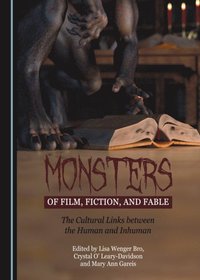 The Cultural Links between the Human and Inhuman

av None, Crystal O' Leary-Davidson Lisa Wenger Bro Mary Ann Gareis
E-bok (PDF - DRM), Engelska, 2018-07-27
1349
Ladda ned
Spara som favorit
Laddas ned direkt
Läs i vår app för iPhone, iPad och Android
Monsters are a part of every society, and ours is no exception. They are deeply embedded in our history, our mythos, and our culture. However, treating them as simply a facet of children's stories or escapist entertainment belittles their importance. When examined closely, we see that monsters have always represented the things we fear: that which is different, which we can't understand, which is dangerous, which is Other. But in many ways, monsters also represent our growing awareness of ourselves and our changing place in a continually shrinking world. Contemporary portrayals of the monstrous often have less to do with what we fear in others than with what we fear about ourselves, what we fear we might be capable of. The nineteen essays in this volume explore the place and function of the monstrous in a variety of media - stories and novels like Baum's Oz books or Gibson's Neuromancer; television series and feature films like The Walking Dead or Edward Scissorhands; and myths and legends like Beowulf and The Loch Ness Monster - in order to provide a closer understanding of not just who we are and who we have been, but also who we believe we can be - for better or worse.
Visa hela texten