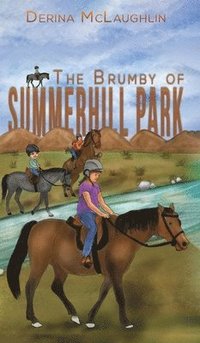 The Brumby of Summerhill Park

av Derina McLaughlin
Inbunden Engelska, 2019-11-28
209
Köp
Spara som favorit
Finns även som
Visa alla 2 format & utgåvor
Alexia and her brother, Brad, travel to the Snowy Mountains, where they rescue a starving brumby whom they name Prince of the Brumbies. When Alexia wants to enter in the annual Stockman's Bush Race over the old gold fields, her hopes are dashed when her chosen ride, the retired race horse Stormy, proves too big and naughty for her. Alexia and her best friend Enya work hard to try and prepare the bush brumby Prince in time for the contest.
Visa hela texten

Derina's hectic career in national cultural institutions in Australia and a 6-year stint on a UNESCO Committee makes her cherish the time she now spends on her farm in Australia with her two sons, ponies and cats. She has won accolades for script writing in Canada and the UK. Derina was presented with the Charlotte Waring Barton Mentorship Award by the Children's Book Council of Australia NSW branch in November 2015. She continues to pen children's stories that create a world of horsey challenges for children to escape into. Her earlier career included science radio talks for ABC Radio. She has a passion for gardening and cooking for friends. She still rides horses for pleasure when possible and judges at horse shows. She is currently dedicating time to a historical fiction novel on the development of horticulture in Victorian Australia.