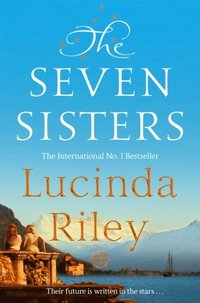 av Lucinda Riley
(2 röster)  |  Läs 1 recension
Häftad Engelska, 2018-10-18
99
Köp
Spara som favorit
Skickas inom 7-10 vardagar.
Fri frakt inom Sverige över 159 kr för privatpersoner.
Finns även som
Visa alla 2 format & utgåvor
The Seven Sisters is a sweeping epic tale of love and loss by the international number one bestseller Lucinda Riley. Maia D'Apliese and her five sisters gather together at their childhood home - a fabulous, secluded castle situated on the shores of Lake Geneva - having been told that their beloved adoptive father, the elusive billionaire they call Pa Salt, has died. Each of them is handed a tantalising clue to their true heritage - a clue which takes Maia across the world to a crumbling mansion in Rio de Janeiro in Brazil . . . Eighty years earlier, in the Belle Epoque of Rio, 1927, Izabela Bonifacio's father has aspirations for his daughter to marry into aristocracy. But Izabela longs for adventure, and convinces him to allow her to accompany the family of a renowned architect on a trip to Paris. In the heady, vibrant streets of Montparnasse, she meets ambitious young sculptor Laurent Brouilly, and knows at once that her life will never be the same again. The Seven Sisters is the first book in the spellbinding Seven Sisters series.
Visa hela texten

Like the famous statue that brought the lovers together and hovers over Rio today, the story is elegantly sculpted and rich with history -- <i>Library Journal</i>, USA Riley is one of the strongest authors in this genre of historical fiction . . . excellent historical detail, heart-wrenching romance, and an engaging mystery -- Historical Novel Society A brilliant page-turner just soaked in glamour and romance * Daily Mail *

Lucinda Riley was born in Ireland, and after an early career as an actress in film, theatre and television, wrote her first book aged twenty-four. Her books have been translated into thirty-seven languages and sold twenty million copies worldwide. She is a No.1 Sunday Times and New York Times bestseller. Lucinda is the author of The Seven Sisters series, which tells the story of adopted sisters and is based allegorically on the mythology of the famous star constellation. It has become a global phenomenon, with each book in the series being a No.1 bestseller across the world. The series is in development with a major Hollywood production company.