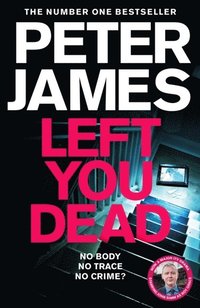 av Peter James
Häftad Engelska, 2021-10-14
130
Köp
Spara som favorit
Finns även som
Visa alla 3 format & utgåvor
*The brand new Roy Grace novel from Peter James - Picture You Dead - is available to pre-order now* Detective Superintendent Roy Grace, creation of the CWA Diamond Dagger award-winning author Peter James, faces his most engrossing case yet in Left You Dead. Niall and Eden Paternoster start their Sunday the same way they always do - with a long drive, a visit to a country house and a quick stop at the local supermarket on the way home. But this Sunday ends differently - because while Niall waits and waits in the car park for Eden to pick up supplies, Eden never returns. She's not waiting for him at home, and none of their family or friends have heard from her. Gone without a trace, Niall is arrested on suspicion of her murder. When DS Roy Grace is called in to investigate, it doesn't take long to realize that nothing in this case is quite as it seems . . . Left You Dead is the seventeenth thrilling crime novel in the Roy Grace series. Enjoy more of the Brighton detective's investigations with Dead Simple, Looking Good Dead and Not Dead Enough. Now a major TV series starring John Simm. 'One of James's most emotionally engaging books' - Mirror
Visa hela texten

One of James's most emotionally engaging books * The Mirror * Peter James has penetrated the inner workings of police procedures, and the inner thoughts and attitudes of real detectives, as no English crime writer before him. His hero, Roy Grace, may not be the most lively cop, nor the most damaged by drink, weight or misery, but he's one of the most believable * The Times * James just gets better and better and deserves the success he has achieved with this first-class series * Independent on Sunday * Meticulous research gives his prose great authenticity . . . James manages to add enough surprises and drama that by the end you're rooting for the police and really don't know if they will finally get their men * Sunday Express *

Peter James is a UK number one bestselling author, best known for writing crime and thriller novels, and the creator of the much-loved Detective Superintendent Roy Grace, now a major ITV series. Globally, his books have been translated into thirty-seven languages and have sold 21 million copies. Synonymous with plot-twisting page-turners, Peter has garnered an army of loyal fans throughout his storytelling career - which also included stints writing for TV and producing films. He has won over forty awards for his work, including the WHSmith Best Crime Author of All Time Award, Crime Writers' Association Diamond Dagger and a BAFTA nomination for The Merchant of Venice starring Al Pacino and Jeremy Irons for which he was an Executive Producer. Many of Peter's novels have been adapted for film, TV and stage. The first two novels in the Roy Grace series, Dead Simple and Looking Good Dead, have been adapted for television by Endeavour's Russell Lewis.