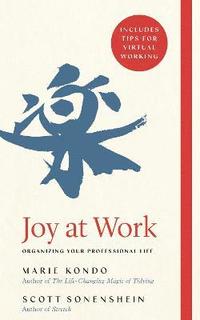 av Marie Kondo, Scott Sonenshein
Häftad Engelska, 2021-10-14
155
Köp
Spara som favorit
Finns även som
Visa alla 3 format & utgåvor
Find your focus with this transformative guide from an organizational psychologist and Marie Kondo, the #1 New York Times bestselling author of The Life-Changing Magic of Tidying and star of the Netflix series Tidying Up with Marie Kondo. Marie Kondo's first book, The Life-Changing Magic of Tidying, sparked a new wave of publishing and became an international bestseller. Now, for the first time, you will be guided through the process of tidying up your work life - digitally and physically. Whether you're working at home, in the office, or a combination of the two, if you properly simplify and organize your work life once, you'll never have to do it again. In Joy at Work, KonMari method pioneer Marie Kondo and organizational psychologist Scott Sonenshein will help you to refocus your mind on what's important at work, and as their examples show, the results can be truly life-changing. With advice on how to improve the way you work, the book features advice on problem areas including fundamentals like how to organize your digital and physical desktop, finally get through your emails and find balance by ditching distractions and focusing on what sparks joy.
Visa hela texten

Marie Kondo's magical new book made me happier at work -- <b><i>Stylist</i></b> A tidy guide to finding joy at work. Full of psychological wisdom and practical tips - I loved it! -- <b>Angela Duckworth, <i>New York Times</i> bestselling author of <i>Grit</i></b> Marie Kondo and Scott Sonenshein understand something very important about life and work: many times the key to success comes from subtracting, not adding. For anyone looking to bring more joy and focus to their office and career, Joy at Work is the book you've been waiting for. -- <b>Alex Banayan, author of the #1 international bestseller <i>The Third Door</i></b> Joy at Work is a charming antidote to the messiness of organizational life. It will help you be happier, waste less time, and lead others -- and is mighty fun to read. -- <b>Bob Sutton, Stanford Professor, organizational psychologist, and author of bestsellers <i>The No Asshole Rule</i> and <i>Good Boss, Bad Boss</i></b> Finding joy at work isn't magic? It takes work. But it might feel a bit more like play thanks to the practical insights from Marie Kondo and Scott Sonenshein. -- <b>Adam Grant, <i>New York Times</i> bestselling author of <i>Originals</i> and <i>Give and Take</i>, and host of the TED podcast WorkLife</b> Marie Kondo and Scott Sonenshein are modern-day superheroes - the dynamic duo of office efficiency and satisfaction. Their timely book delivers the tools, questions, and mindsets you need to rid the clutter that's piling on your desk, clogging your calendar, and infiltrating your personal networks. If you want joy in life, the place to begin is Joy at Work. -- <b>Daniel H. Pink,<i> </i><i>New York Times </i>bestselling author of<i> </i><i>When</i><i>, </i><i>To Sell Is Human</i>, and<i> <i>Drive</i></i></b> The Japanese organisation consultant has revolutionised the way we organise our homes, and our lives. -- <b><i>Good Housekeeping</i></b>

Marie Kondo is a tidying expert, bestselling author, star of Netflix's hit show, Tidying Up With Marie Kondo, and founder of KonMari Media, Inc. In her #1 New York Times bestselling book, The Life-Changing Magic of Tidying, Marie took tidying to a whole new level, teaching that if you properly simplify and organize your home once, you'll never have to do it again. Marie has been featured in Time magazine, New York Times, Wall Street Journal, The Times, Vogue, The Ellen Show as well as on more than fifty major Japanese television and radio programs. She has also been named one of Time magazine's 100 Most Influential People in the World. Scott Sonenshein is an organizational psychologist and professor at Rice University. He is the author of Stretch: Unlock the Power of Less-And Achieve More Than You Ever Imagined. His award winning research, teaching, and speaking has helped Fortune 500 executives, entrepreneurs, and professionals in industries such as technology, energy, healthcare, retail, education, banking, manufacturing, and non-profits. Scott has written for the New York Times, Time Magazine, Fast Company and Harvard Business Review.