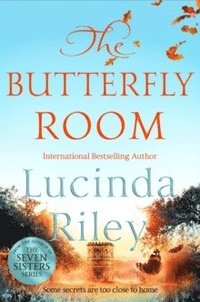 av Lucinda Riley
(2 röster)
Häftad Engelska, 2019-09-26
113
Köp
Spara som favorit
Finns i lager! Skickas inom 1-2 vardagar.
Gratis frakt inom Sverige över 159 kr för privatpersoner.
Finns även som
Visa alla 3 format & utgåvor
Richard and Judy Book Club Pick 2019 and a Sunday Times Number One Bestseller. Full of her trademark mix of unforgettable characters and heart-breaking secrets, The Butterfly Room is a spellbinding, multi-generational story from Sunday Times bestseller Lucinda Riley. Posy Montague is approaching her seventieth birthday. Still living in her beautiful family home, Admiral House, set in the glorious Suffolk countryside where she spent her own idyllic childhood catching butterflies with her beloved father, and raised her own children, Posy knows she must make an agonizing decision. Despite the memories the house holds, and the exquisite garden she has spent twenty-five years creating, the house is crumbling around her, and Posy knows the time has come to sell it. Then a face appears from the past - Freddie, her first love, who abandoned her and left her heartbroken fifty years ago. Already struggling to cope with her son Sam's inept business dealings, and the sudden reappearance of her younger son Nick after ten years in Australia, Posy is reluctant to trust in Freddie's renewed affection. And unbeknown to Posy, Freddie - and Admiral House - have a devastating secret to reveal . . . 'Absorbing family sagas set in glamorous locations' - Daily Mail 'Captivating . . . This multi-generational tale is a poignant yet uplifting novel that strikes just the right balance with its tone and characters.' - Woman's Own
Visa hela texten

Absorbing family sagas set in glamorous locations . . . A perfect beach read. * Daily Mail * Captivating . . . This multi-generational tale is a poignant yet uplifting novel that strikes just the right balance with its tone and characters. * Woman's Own * Masterful storytelling and imaginative power are the trademarks of Riley's novels and this 600-page epic delivers a full-throttle escapist adventure with an extraordinary cast of unreliable characters, a right royal mystery and surprises at every turn. An intriguing change of direction from one of our best-loved authors . . . -- <i>Lancashire Evening Post </i>reviewing <i>The Love Letter</i> Perfect summer escapism, with twists galore. -- <i>Best</i> magazine reviewing<i> The Love Letter</i>

Lucinda Riley was born in Ireland, and after an early career as an actress in film, theatre and television, wrote her first book aged twenty-four. Her books have been translated into thirty-seven languages and sold twenty million copies worldwide. She is a No.1 Sunday Times and New York Times bestseller. Lucinda's The Seven Sisters series tells the story of adopted sisters and is based allegorically on the mythology of the famous star constellation. It has become a global phenomenon, with each book in the series being a No.1 bestseller across the world. The series is in development with a major Hollywood production company.