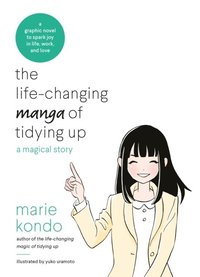 The Life-Changing Manga of Tidying Up

A Magical Story to Spark Joy in Life, Work and Love

av Marie Kondo
(1 röst)  |  Läs 1 recension
Häftad Engelska, 2019-10-17
106
Köp
Spara som favorit
Finns även som
Visa alla 1 format & utgåvor
From the #1 New York Times bestselling author and star of Netflix's Tidying Up with Marie Kondo, this graphic novel brings Kondo's life-changing tidying method to life with the fun, quirky story of a woman who transforms her home, work, and love life using Kondo's advice and inspiration. In The Life-Changing Manga of Tidying Up, Marie Kondo presents the fictional story of Chiaki, a young woman in Tokyo who struggles with a cluttered apartment, messy love life, and lack of direction. After receiving a complaint from her attractive next-door neighbour about the sad state of her balcony, Chiaki gets Kondo to take her on as a client. Through a series of entertaining and insightful lessons, Kondo helps Chiaki get her home - and life - in order. This insightful, illustrated case study is perfect for people looking for a fun introduction to the KonMari Method of tidying up, as well as tried-and-true fans of Marie Kondo eager for a new way to think about what sparks joy. Featuring illustrations by award-winning manga artist Yuko Uramoto, this book also makes a great read for manga and graphic novel lovers of all ages.
Visa hela texten

Like a cartoon character come to life to bless you with tidiness. -- <b><i>The Washington Post</i></b> Charming and whimsical . . . if organizational mandates are medicine, this book is like a spoonful of sugar. -- <b><i>Los Angeles Times</i></b> Her voice . . . is by turns stern and enchanted, like a fairy godmother for socks. -- <i><b>The Wall Street Journal</b></i> The organization expert who dazzled the world. -- <i><b>People</b></i>

Marie Kondo is a tidying expert, star of the Netflix series Tidying Up with Marie Kondo, #1 New York Times bestselling author, and founder of KonMari Media, Inc. Enchanted with organizing since her childhood, Marie began her tidying consultant business as a nineteen year-old university student in Tokyo. Today, Marie is a renowned tidying expert helping people around the world to transform their cluttered homes into spaces of serenity and inspiration. Marie has been featured on more than fifty major Japanese television and radio programs as well as in the New York Times, Wall Street Journal, The Times, Vogue, Ellen, the Rachael Ray show and her own Netflix show. She has also been listed as one of Time magazine's 100 most influential people.