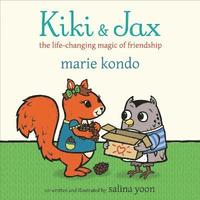 The Life-Changing Magic of Friendship

av Marie Kondo
Häftad Engelska, 2021-02-04
87
Köp
Spara som favorit
Finns även som
Visa alla 2 format & utgåvor
Tidying superstar Marie Kondo brings her unique magic to Kiki and Jax, a charming picture book story about how tidying up can spark joy in the lives of young children. Kiki and Jax are best friends - Jax enjoys sorting but Kiki enjoys collecting and gathers a lot of stuff. Soon her home is full of things all over the place. Where is Kiki's ball? What did she do with her swimsuit? Her home has become an obstacle course and it's hard for Kiki and Jax to play together. But Jax has a plan - he teaches Kiki how to sort everything and to keep only those things that spark joy. Once she and Jax have tidied up, Kiki has room in her life for those things that matter the most - especially Jax! Charmingly illustrated by Salina Yoon, Kiki and Jax is an accessible introduction to Marie Kondo - complete with a special step-by-step folding activity - this charming story will make tidying fun for even the youngest of children!
Visa hela texten

Marie Kondo has been enchanted with organizing since her childhood and began her tidying consultancy business as a nineteen year old university student in Tokyo. Today she is a renowned tidying expert, helping people around the world to transform their cluttered homes into spaces of serenity and inspiration. She stars in the Netflix hit show Tidying Up with Marie Kondo and is the founder of KonMari Media, Inc. Marie has featured in numerous magazines and newspapers and was listed as one of Time magazine's 100 most influential people. Marie lives in Los Angeles with her husband and their two young children, who helped inspire Marie's first picture book, Kiki and Jax. Salina Yoon was born in Korea and emigrated to the United States at the age of four. She is an author, illustrator and format designer and has worked on nearly 200 books for young children, specializing in interactive and novelty books. She lives in San Diego, California, with her husband and their two sons.