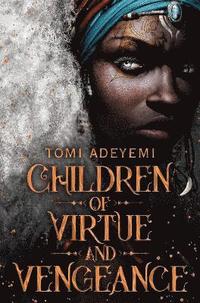 Children of Virtue and Vengeance

av Tomi Adeyemi
Inbunden Engelska, 2019-12-03
135
Köp
Spara som favorit
Kan levereras innan julafton!
Finns även som
Visa alla 6 format & utgåvor
Children of Virtue and Vengeance is the breathtaking second title in Tomi Adeyemi's YA fantasy trilogy, Legacy of Orisha, following her ground-breaking, West African-inspired debut Children of Blood and Bone. After battling the impossible, Zelie and Amari have finally succeeded in bringing magic back to the land of Orisha. But the ritual was more powerful than they imagined, reigniting the powers of not only the maji but also some nobles with magic ancestry. Now, Zelie struggles to unite the maji in an Orisha where the enemy is just as strong and magical as they are. When Amari's mother forms an army of royals with newly awakened powers, Zelie fights to secure Amari's right to the throne and protect the new maji from the monarchy's wrath. But with civil war looming on the horizon, Zelie finds herself at a breaking point: she must find a way to bring the kingdom together or watch as Orisha tears itself apart.
Visa hela texten

Black Girl Magic indeed! It's no surprise that this epic trilogy opener has already been optioned for film. Full of cinematic action sequences (the most memorable of them set underwater and employing an army of the dead) and creatures worthy of Star Wars (horse-sized 'lionaires' have saber teeth and horns), it storms the boundaries of imagination. Yet it also confronts the conscience. Adeyemi's brutally depicted war between the noble, lighter-skinned kosidans, and the enslaved, darker-skinned majis poses thought-provoking questions about race, class, and authority that hold up a warning mirror to our sharply divided society. -- <i>The New York Times</i>, on <i>Children of Blood and Bone</i> Infused with rich mythology of west Africa, Adeyemi's lush world-building and consummate plotting breathes new life into a YA fantasy epic. Themes of oppression and racism resonate all too strongly in today's political climate. The cliffhanger ending may leave some readers reeling but, rest assured, this is first in a trilogy. -- <i>Observer</i>, on <i>Children of Blood and Bone</i> Epic fantasy YA debut of magic and war. -- <i>Guardian, </i>on <i>Children of Blood and Bone</i> In one of the most highly-anticipated fantasy releases this year, Tomi Adeyemi spins a luxe tale of magic, adventure, and forbidden love. Zelie lives in a world once ruled by magic, but mass-murders decreed by a new king have all but stamped her people out, and she has a narrow window to bring the magic of her lands back to life. Fans of Leigh Bardugo and Game of Thrones will gobble this up. -- Buzzfeed, on <i>Children of Blood and Bone</i> The series will be a trilogy, and if, at times, that middle book feeling weighs down events, Adeyemi's consummate worldbuilding remains a star turn, while the political shifts and prejudices reflect contemporary struggles -- Fiona Noble * Observer * All our bookselling instincts tell us Children of Blood and Bone is a book apart. Posted to YouTube, author Tomi Adeyemi's surge of tearful joy at seeing her debut in the flesh instantly went viral, lending something very real and important to the long journey of her novel finally finding print. This is a tale brimming with courage, injustice, magic and star-crossed love, as young Zelie comes to terms with the extraordinary gifts she has been forced to keep hidden and the revenge that burns in her heart. With sweeping, prescient themes of race and heritage, Children of Blood and Bone is poised to be the breakout YA hit of 2018. -- Waterstones Loves, on <i>Children of Blood and Bone</i> When it comes to fantasy fiction, Tomi Adeyemi is leading the charge. Zelie Adebola is a character who has pulled me into her deliciously magical world once more, and I don't want to leave. As far as sequels go, Tomi Adeyemi could write a hundred books in this series and keep us just as gripped as we were in the first instalment. Astonishing. -- Candice Carty-Williams, author of <i>Queenie</i> This highly anticipated fantasy novel earned its 23-year-old Nigerian-American author a seven-figure deal. The first instalment of a three-part young adult trilogy, it draws on African myth and folklore and was reportedly inspired by the Black Lives Matters movement. The film rights were snapped up before the book was even published. -- Irish Independent, on <i>Children of Blood and Bone</i> Tomi Adeyemi has created a lush, vibrant world, full of legend and lore, more than enough to sate even the most ravenous fantasy fan. She deserves special commendation for steering away from the creatures so often shoe-horned into fantasy novels, and instead creating her own magical beasts, who fit seamlessly into the narrative. There are swoony moments, shocking moments, terrifying moments, and heartbreaking moments. It's a masterful debut, and one many readers will adore. -- Melinda Salisbury, author <i&g

Tomi Adeyemi is a Nigerian-American writer and creative writing coach based in San Diego, California. After graduating Harvard University with an honors degree in English literature, she received a fellowship that allowed her to study West African mythology, religion, and culture in Salvador, Brazil. Her first novel is Children of Blood and Bone, and Children of Virtue and Vengeance is its sequel. When she's not working on her novels or watching BTS music videos, she can be found blogging and teaching creative writing on her website.