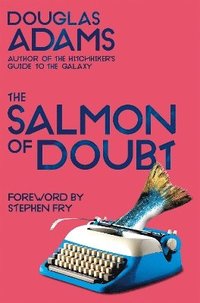 The Salmon of Doubt

Hitchhiking the Galaxy One Last Time

av Douglas Adams
Häftad Engelska, 2021-04-29
117
Köp
Spara som favorit
Finns även som
Visa alla 2 format & utgåvor
The Salmon of Doubt is Douglas Adams's indispensable guide to life, the universe and everything. It includes short stories and eleven chapters of a Dirk Gently novel that Douglas Adams was working on at the time of his death, and features an introduction by Stephen Fry. This sublime collection dips into the wit and wisdom of the man behind The Hitchhiker's Guide to the Galaxy, uncovering his unique comic musings on everything from his school-trousers to malt whisky and from the letter Y through to his own nose, via atheism, hangovers and fried eggs. These hilarious collected writings reveal the warmth, enthusiasm and ferocious intelligence behind this most English of comic writers; a man who was virtually an unofficial member of the Monty Python team. Douglas Adams on his passion for P. G. Wodehouse, The Beatles and the perfect cup of tea alone make this a must-have collection and a remarkable sign-off from one of the best loved writers of all time. Start from the beginning of the surreal Dirk Gently series with Dirk Gently's Holistic Detective Agency.
Visa hela texten

An astonishing comic writer -- Neil Gaiman A pleasure to read * New York Times * Few recent writers have had such an infectious prose style as Adams. With his fondness for paradox, his galactic perspective on things and his wonderful way with meaningful nonsense his are the books which have launched a trillion quips -- Robert McFarlane

Douglas Adams created all the various and contradictory manifestations of The Hitchhiker's Guide to the Galaxy: radio, novels, TV, computer game, stage adaptations, comic book and bath towel. He lectured and broadcast around the world and was a patron of the Dian Fossey Gorilla Fund and Save the Rhino International. Douglas Adams was born in Cambridge, UK and lived with his wife and daughter in Islington, London, before moving to Santa Barbara, California, where he died suddenly in 2001.