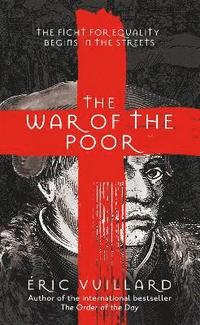 The War of the Poor

av Eric Vuillard
Inbunden Engelska, 2021-01-07
119
Köp
Spara som favorit
Kan levereras innan julafton!
Finns även som
Visa alla 5 format & utgåvor
Shortlisted for the International Booker Prize 2021 'A dazzling piece of historical re-imagining and a revolutionary sermon, a furious denunciation of inequality' The judges of the International Booker prize. The fight for equality begins in the streets. From the internationally bestselling author of The Order of the Day: Eric Vuillard once again takes us behind the scenes at a moment when history was being written. The history of inequality is a long and terrible one. And it's not over yet. Short, sharp and devastating, The War of the Poor tells the story of a brutal episode from history, not as well known as tales of other popular uprisings, but one that deserves to be told. Sixteenth-century Europe: the Protestant Reformation takes on the powerful and the privileged. Peasants, the poor living in towns, who are still being promised that equality will be granted to them in heaven, begin to ask themselves: and why not equality now, here on earth? There follows a violent struggle. Out of this chaos steps Thomas Muntzer: a complex and controversial figure, who sided with neither Martin Luther, nor the Roman Catholic Church. Muntzer addressed the poor directly, encouraging them to ask why a God who apparently loved the poor seemed to be on the side of the rich. Eric Vuillard tells the story of one man whose terrible and novelesque life casts light on the times in which he lived - a moment when Europe was in flux. As in his blistering look at the build-up to World War II, The Order of the Day, Vuillard 'leaves nothing sleeping in the shadows' (L'OBS).
Visa hela texten

This brief, ardent book, half-historical essay and half-revolutionary tract, mingles swift-moving tableaux from the preacher's life and age with Vuillard's pulpit homilies on oppression and resistance . . . its incendiary prose well served by Mark Polizzotti's translation, has scenes of firecracker intensity. * Financial Times * [A] compact, artful blend of history and fiction . . . in cinematic bursts of image and action . . . [Vuillard] never forces analogies with the present, but the uprisings he describes feel like part of a war destined to rage in any era beset by gross inequalities. * New Yorker * It is very French and I mean that as a whole-hearted compliment . . . Set in a Europe of political division, sickness, disenfranchisement, poverty and simmering rebellion, it may be patterned on the gilets jaunes disruptions but is far more universal. The narrator is both aloof and humble; not willing to speculate about Muntzer's motives, but desperate to understand him. -- Stuart Kelly * Scotland on Sunday * A slender, vivid history of a 16th-century populist revolt that holds relevance for current times . . . A slim book in which every word is important, one that deserves to be read multiple times. * Kirkus (starred review) * Vuillard is the master demystifier, who leaves nothing sleeping in the shadows. He is only civil when it comes to language, which he applies with a devastating irony and a grace that one rarely reads. -- Gregoire Lemenager * L'OBS * A short and incandescent text. * Le Monde *

Eric Vuillard is a writer and film-maker born in Lyon in 1968 who has written nine award-winning books, including Sorrow of the Earth and The Order of the Day, which won the 2017 Prix Goncourt, France's most prestigious literary prize.