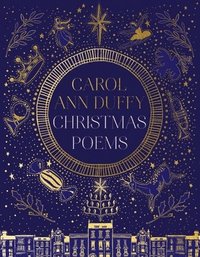 av Carol Ann Duffy Dbe
Inbunden Engelska, 2021-11-25
213
Köp
Spara som favorit
This beautifully illustrated collection brings together, for the first time, Carol Ann Duffy's much-celebrated festive poems. For a decade, while she was Poet Laureate, Carol Ann Duffy gifted her thousands of readers an illustrated poem every Christmas, transporting them in one year to a seventeenth-century festival on the frozen Thames, in another to Western Front to witness the famous 1914 truce, then to a sweet winter's night in the South of France with Pablo Picasso and his small dog. Christmas Poems showcases Duffy's bold and innovative voice, alongside gorgeous artwork from Rob Ryan, David De Las Heras and Lara Hawthorne, amongst others. These ten much-loved poems are gathered together for the first time in this compendium to make a perfect gift for old friends celebrating a decade's tradition or those experiencing the magic of Duffy's festive verse for the first time.
Visa hela texten

Duffy's spellbinding verse, spiced with witty, wintry illustrations, recaptures a magic most of us left behind in childhood * Intelligent Life *

Carol Ann Duffy lives in Manchester, where she is Professor and Creative Director of the Writing School at Manchester Metropolitan University. She has written for both children and adults, and her poetry has received many awards, including the Signal Prize for Children's Verse, the Whitbread, Forward and T. S. Eliot Prizes, and the Lannan and E. M. Forster Prize in America. She was Poet Laureate of the United Kingdom 2009-2019. In 2011 The Bees won the Costa Poetry Award, and in 2012 she won the PEN Pinter Prize. She was made a DBE in the 2015 New Year's Honours list.