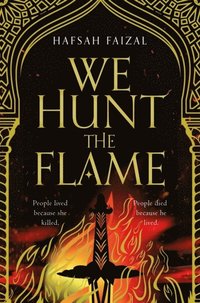 We Hunt the Flame

TikTok Made Me Buy It!

av Hafsah Faizal
(1 röst)
Häftad Engelska, 2021-03-18
105
Köp
Spara som favorit
Finns även som
Visa alla 1 format & utgåvor
The bestselling TikTok sensation! Set in a richly detailed world inspired by ancient Arabia, Hafsah Faizal's We Hunt the Flame is a breathtaking debut about discovery, conquering fear and taking identity into your own hands. Perfect for fans of Leigh Bardugo's Shadow and Bone series. People lived because she killed. People died because he lived. Zafira is the Hunter. Forced to disguise herself as a man, she risks everything to provide for her people. Nasir is the Prince of Death. A feared assassin who is forever bound to the command of his father, the sultan. Both are legends in their kingdom - but neither wants to be. And when Zafira embarks on a dangerous quest to return magic to their suffering land, Nasir is sent on a similar mission. But as their journey unfolds, an anvient evil begins to stir . . . Don't miss the epic sequel and conclusion to the Sands of Arawiya duology, We Free The Stars. *An instant New York Times bestseller* *A BuzzFeed pick for 'YA Books You Absolutely Must Read This Spring'*
Visa hela texten

Could be the next Game of Thrones * Bustle * Delivers on all fronts. This book carries social importance-bringing magic and curiosity and complexity to the Arab world is still hardly done in Western pop culture-but beyond that, We Hunt the Flame is just an exciting, surprising read * Entertainment Weekly * Faizal bends fantasy tropes to her will to tell a fresh and gripping story about love, honor, and self-discovery that will leave readers scrambling for more. -- <i>Booklist</i>, starred review With fierce characters, deathly challenges, and world-building both lyrical and spellbinding, We Hunt the Flame is unputdownable -- Marieke Njikamp, #1 New York Times bestselling author Filled with rich worldbuilding with stakes that will keep you at the edge of your seat * Buzzfeed * Lyrical and filled with adventure, a slow-burn romance, and an unforgettable cast of characters in a world based on ancient Arabia, this is a debut series not to be missed -- <i>School Library Journal</i>, starred review Hafsah Faizal creates a dazzling and beautiful world that will make you not want to put this book down -- <i>Seventeen Magazine</i> Hafsah Faizal's writing is so lush and evocative . . . gripping right from the first page -- <i>Popsugar</i> A sparkling debut, full of mystery and magic, vivid characters, and rich language -- Roshani Chokshi, <i>New York Times</i> bestselling author Beautiful storytelling, mesmerizing settings, and fiery characters-We Hunt the Flame is danger, magic, and hope all wrapped into one, and it is intoxicating -- Evelyn Skye, <i>New York Times-</i>bestselling author of the Crown's Game series Enter the cursed world of Arawiya, and meet the girl who defies that curse * Hypable * Inspired by ancient Arabia, Hafsah Faizal's dazzling young adult novel focuses on the kingdom of Arawiya, where a lost artifact is needed to restore magic to the world . . . Though certainly a love story, We Hunt the Flame is also a moving portrait of a heroine growing into her power as Zafira fights against the oppression of women. * Time Magazine, the Top 100 Fantasy Books of All Time. *

Hafsah Faizal is the New York Times bestselling author of the Sands of Arawiya duology, which includes TikTok sensation We Hunt the Flame and We Free Stars, and the founder of IceyDesigns, where she creates websites for authors and beauteous goodies for everyone else. When she's not writing, she can be found designing, deciding between Assassin's Creed and Skyrim, or traversing the world. Born in Florida and raised in California, she now resides in Texas with her family and a library of books waiting to be devoured.