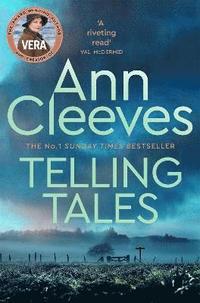 av Ann Cleeves
Häftad Engelska, 2020-11-26
114
Köp
Spara som favorit
Finns även som
Visa alla 1 format & utgåvor
Telling Tales is the second book in Ann Cleeves' Vera Stanhope series - which is now a major ITV detective drama starring Brenda Blethyn as Vera . They thought she was a murderer. But now she's a victim . . . Ten years ago fifteen-year-old Abigail Mantel was murdered, her cold body discovered lying in a ditch. Her father's girlfriend was found guilty of the crime. Now, evidence has emerged that proves her innocence and means that Abigail's killer still roams free. Abigail's best friend at the time of the murder has now returned to the East Yorkshire village of Elvet to raise her young family. Shocked by the new revelations, she begins to realize that she didn't know her friend as well as she thought . . . Detective Inspector Vera Stanhope is tasked with uncovering the truth and, as her new inquiries stoke up past secrets the villagers will lie to protect, she must find out which lies will bring her to the killer. Enjoy more of Vera Stanhope's investigations with The Crow Trap, Hidden Depths, Silent Voices, The Glass Room, Harbour Street, The Moth Catcher, The Seagull and The Darkest Evening.
Visa hela texten

A riveting read -- Val McDermid Millions will be familiar with Brenda Blethyn's portrayal of Vera in the television series of the same name but Cleeves' engaging prose provides a much deeper, subtler insight into an intriguing and likeable character * Daily Express *

Ann Cleeves is the author of over thirty critically acclaimed novels, and in 2017 was awarded the highest accolade in crime writing, the CWA Diamond Dagger. She is the creator of popular detectives Vera Stanhope and Jimmy Perez who can now be found on television in ITV's Vera and BBC One's Shetland. The TV series and the books they are based on have become international sensations, capturing the minds of millions worldwide. Ann worked as a probation officer, bird observatory cook, and auxiliary coastguard before she started writing. She is a member of 'Murder Squad', working with other British northern writers to promote crime fiction. Ann is also a passionate champion for libraries and was a National Libraries Day Ambassador in 2016. Ann lives in North Tyneside near where the Vera books are set.