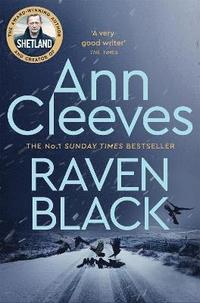 av Ann Cleeves
Häftad Engelska, 2021-03-18
130
Köp
Spara som favorit
Finns även som
Visa alla 2 format & utgåvor
Introducing Inspector Jimmy Perez. Raven Black is the first book in Ann Cleeves' bestselling Shetland series - a major BBC One drama, starring Douglas Henshall. A remote community with a killer in their midst . . . On New Year's Day Shetland lies buried beneath a deep layer of snow. Trudging home, Fran Hunter's eye is drawn to a vivid splash of colour on the white ground, ravens circling above. It is the strangled body of her teenage neighbour. As Fran opens her mouth to scream, the ravens continue their deadly dance . . . The body is found close to the home of a lonely outcast and local suspicion falls firmly on him. But when Inspector Jimmy Perez insists on broadening the search for suspects, a veil of distrust and fear is thrown over the entire community. As the case develops Perez finds himself peering deeper into the past of the Shetland Islands than anyone wants to go. Also available in the Shetland series are White Nights, Red Bones, Blue Lightning, Dead Water and Thin Air.
Visa hela texten

Ann Cleeves is the author of over thirty critically acclaimed novels, and in 2017 was awarded the highest accolade in crime writing, the CWA Diamond Dagger. She is the creator of popular detectives Vera Stanhope and Jimmy Perez, who can now be found on television in ITV's Vera and BBC One's Shetland. The TV series and the books they are based on have become international sensations, capturing the minds of millions worldwide. Ann worked as a probation officer, bird observatory cook and auxiliary coastguard before she started writing. She is a member of 'Murder Squad', working with other British northern writers to promote crime fiction. Ann is also a passionate champion for libraries and was a National Libraries Day Ambassador in 2016. Ann lives in North Tyneside, near where the Vera books are set.