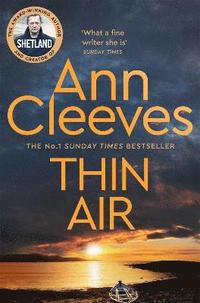 av Ann Cleeves
Häftad Engelska, 2021-05-13
97
Köp
Spara som favorit
Thin Air is the sixth book in Ann Cleeves's bestselling Shetland series - now a major BBC One drama starring Douglas Henshall. A killer who leaves no trace . . . A group of old university friends leave the bright lights of London and travel to Shetland to celebrate the marriage of one of their friends to a local. But late on the night of the wedding party, one of them, Eleanor, disappears - apparently into thin air. Detectives Jimmy Perez and Willow Reeves are dispatched to investigate. Before she went missing, Eleanor claimed to have seen the ghost of a local child who drowned in the 1920s. Jimmy and Willow are convinced that there is more to Eleanor's disappearance than they first thought. Is there a secret that lies behind the myth? One so shocking that many years later someone would kill to protect it? Continue the gripping mystery series with Cold Earth and Wild Fire.
Visa hela texten

Ann Cleeves is the author of over thirty critically acclaimed novels, and was awarded the highest accolade in crime writing, the CWA Diamond Dagger. She is the creator of popular detectives Vera Stanhope and Jimmy Perez, who can now be found on television in ITV's Vera and BBC One's Shetland. The TV series and the books they are based on have become international sensations, capturing the minds of millions worldwide. Before she started writing, Ann worked as a probation officer, bird observatory cook and auxiliary coastguard. She is a member of 'Murder Squad', working with other northern British writers to promote crime fiction. Ann is also a passionate champion for libraries and has been a National Libraries Day Ambassador. Ann lives in North Tyneside, near where the Vera books are set.