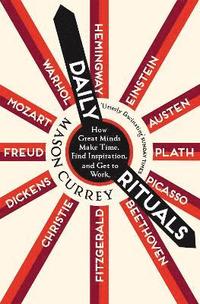 How Great Minds Make Time, Find Inspiration, and Get to Work

av Mason Currey
Häftad Engelska, 2020-06-11
114
Köp
Spara som favorit
Finns även som
Visa alla 1 format & utgåvor
'Utterly fascinating' Daisy Goodwin, Sunday Times Benjamin Franklin took daily naked air baths and Toulouse-Lautrec painted in brothels. Edith Sitwell worked in bed, and George Gershwin composed at the piano in pyjamas. Freud worked sixteen hours a day, but Gertrude Stein could never write for more than thirty minutes, and F. Scott Fitzgerald wrote in gin-fuelled bursts - he believed alcohol was essential to his creative process. From Marx to Murakami and Beethoven to Bacon, Daily Rituals by Mason Currey presents the working routines of more than a hundred and sixty of the greatest philosophers, writers, composers and artists ever to have lived. Whether by amphetamines or alcohol, headstand or boxing, these people made time and got to work. Featuring photographs of writers and artists at work, and filled with fascinating insights on the mechanics of genius and entertaining stories of the personalities behind it, Daily Rituals is irresistibly addictive, and utterly inspiring.
Visa hela texten

I just can't recommend this book enough -- Lena Dunham A trove of entertaining anecdote and thought-provoking comparison -- Toby Lichtig * Daily Telegraph * A chance to see what great lives look like when the triumphs, dramas, disruptions and divorces have been all but boiled away. It will fascinate anyone who wonders how a day might best be spent, especially those who have wondered of their artistic heroes, as a baffled Colette once did of George Sand: how the devil did they manage? * Guardian * Utterly fascinating -- Daisy Goodwin * Sunday Times * Mason Currey has carefully compiled the daily habits and personal foibles of 161 great writers, artists, scientists and thinkers, including one who stood on his head to cure creative block. By the end of this book, our carpet-glue habit looks normal -- DBC Pierre * Guardian * A fascinating little book * Financial Times * An utterly fascinating compendium . . . This book is the ultimate retort to the flaneurs who dream about the novel/screenplay/painting they would create if only they had the time. Its message is that serious artists make the time, and most of them make it at the same time every day -- Daisy Goodwin * Sunday Times * A thoroughly researched, minutely annotated and delightful book, full of the quirks and oddities of the human comedy . . . Its main lesson can be summed up simply enough: get up, have a cup of coffee, sit at your desk and begin * Literary Review * Some of the world's greatest minds had routines they stuck to to produce their works of genius. In Daily Rituals, Mason Currey reveals their more bizarre habits * Daily Mirror * Fascinating . . . it also interestingly reveals that there is no universal formula to greatness, so in essence, it's a celebration of individuality and quirkiness * Huffington Post *

Mason Currey was born in Pennsylvania, and graduated from the University of North Carolina at Asheville. Currey's writing has appeared in Slate, Metropolis, and Print. He lives in New York.