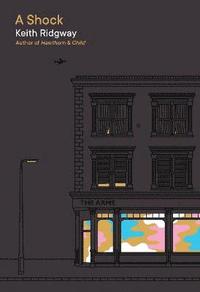 av Keith Ridgway
Inbunden Engelska, 2021-06-24
201
Köp
Spara som favorit
Finns även som
Visa alla 1 format & utgåvor
'A Shock inhabits the secret life of a city, its hidden energies. It dramatizes how patterns form and then disperse, how stories are made and relationships created . . . remarkable' - Colm Toibin, author of Brooklyn 'Political, pertinent, spunky and funny, A Shock is a grand sweep of modern storytelling' - June Caldwell, author of Room Little Darker In A Shock, a clutch of more or less loosely connected characters appear, disappear and reappear. They are all of them on the fringes of London life, often clinging on - to sanity or solvency or a story - by their fingertips. Keith Ridgway, author of the acclaimed Hawthorn & Child, writes about people whose understanding of their own situation is only ever partial and fuzzy, who are consumed by emotions and anxieties and narratives, or the lack thereof, that they cannot master. He focuses on peripheral figures who mean well and to whom things happen, and happen confusingly, and his fictional strategies reflect this focus. In a deftly conjured high-wire act, Ridgway achieves the fine balance between the imperatives of drama and fidelity to his characters. The result is pin-sharp and often breathtaking. 'A Shock is a perfect, living circle of beauty and mystery, clearsighted and compassionate, and, at times, wonderfully funny' - David Hayden, author of Darker With the Lights On
Visa hela texten

A Shock inhabits the secret life of a city, its hidden energies. It dramatizes how patterns form and then disperse, how stories are made and relationships created. Keith Ridgway offers his London a luminous glow, but his competing narratives are also rooted in a real place, with a remarkable sense of character and the shifting systems that make up his contemporary urban space -- Colm Toibin Like Finnegans Wake, only readable. Ridgway's trick - no, his skill - is that the stories combine down-to-earth real-ism with an incremental sense of strange-ness. He seduces you, then smacks you over the head, abandoning you miles fromwhere you thought you'd be * The Times * Ingeniously slippery - what initially looks like a collection of loosely linked short stories reveals itself to be an expertly constructed house of mirrors . . . A Shock is the kind of novel that rewards multiple readings, new echoes and connections revealing themselves each time. And, in the same way that one character describes the unsettling, near-hallucinatory side effects of doing certain drugs - 'it's just peripheral, corner of the eye stuff, movements'- you get the sense of myriad other lives unfolding around those described here, all tantalizingly out of sight -- Lucy Scholes * New York Times Book Review * A sultry, steamy shock of a novel . . . a provocative collection of nine interlinked stories, jostled together like neighbours on a London street or regulars in a pub, which is where most of his characters cross paths * The Spectator * Keith Ridgway's gifts as a writer are many: his complex, vivid characters, his ability to create a humane and tender cityscape in an unfeeling metropolis, and to dig into our fallibilities and desires with such humour and compassion -- Sinead Gleeson Surreal and sinisterly comic south London scenes, peopled by a shadowy cast of characters who wander haphazardly in and out of view . . . Shifting between a range of styles and perspectives, the minimally signposted narration, twinned with Ridgway's delicious ear for dialogue, lends a voyeuristic quality to much of A Shock, as if we're somehow present where we shouldn't be . . . endlessly interesting -- Anthony Cummins * The Observer * Keith Ridgway is an incredible writer and A Shock is a wonder: a mosaic of south-east London lives that constantly makes daring, unexpected moves, and is truer to the city than strict realism ever could be. There were times, reading this book, that I never wanted it to end -- Chris Power A Shock is a meticulously crafted diorama, built on a scale that's at once claustrophobic and expansive, running through cycles that are by turns bleak, hilarious, chilling and hopeful, and culminating in an ingenious finale that sees it consume its own tale * Vanity Fair * Ridgway brings an impeccably attentive ear and eye to the stories and dreams and defiances of his contemporary London characters. In these multiple voices he miraculously captures, with innovative clarity, what it means to be alive here and now, in or out of it on love or loneliness or the phone. A great and generous book, an incomparable achievement -- Richard Beard Simply imagine being as good at anything as Keith Ridgway is at writing -- Nicole Flattery on Keith Ridgway Ridgway has returned to interlinked stories for his clever and provocative seventh novel, which has interesting things to say about loss and survival . . . Readers are instantly involved in the action of Ridgway's worlds, the characters he writes with great compassion and clarity, and always with an awareness of the fuzziness of being alive, the answers and enlightenments that come too late, or not at all -- Sarah Gilmartin * Irish Times * One of the remarkable things about A Shock is how the characters get under the reader's skin . . . But what we also get, amid the well-observed portrayal of how people behave, interact and try to live, are some strange moments . . . What writers can do is tell stories, and A Shock is full not

Keith Ridgway is from Dublin, and lives in London. A Shock is his fifth novel.