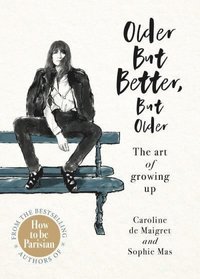 Older but Better, but Older

From the authors of How To Be Parisian

av Caroline De Maigret, Sophie Mas
(2 röster)
Inbunden Engelska, 2020-01-02
172
Köp
Spara som favorit
Finns även som
Visa alla 4 format & utgåvor
With playful wit, worldly advice and savvy observation, the bestselling authors of How to Be Parisian tackle the Parisian art of growing up. Caroline de Maigret and Sophie Mas are back to amuse you, saying what you don't expect to hear, just the way you want to hear it. But this time they reveal how they are modifying their favourite bad girl habits and mischievous mindsets now they are more 'madame' than 'mademoiselle'. These iconoclastic, bohemian Parisiennes advise on love, seduction, fashion and dating as well as family, work, living alone and accepting imperfections. Both poignant and laugh-out-loud funny, this gorgeous, tongue-in-cheek guide astutely illuminates what it means to be a fully-fledged woman.
Visa hela texten

Caroline de Maigret (Author) Caroline de Maigret studied literature at the Sorbonne before moving to New York to model. She returned to Paris in 2006 to found her music label. De Maigret has been an ambassador for Chanel since 2012, and supports women worldwide through the NGO CARE. In 2014, she became a muse for Lancome. Sophie Mas (Author) Sophie Mas was born and raised in Paris. After graduating from Sciences Po and HEC, she started her own film company and now works as a producer in Los Angeles, New York and Sao Paulo.