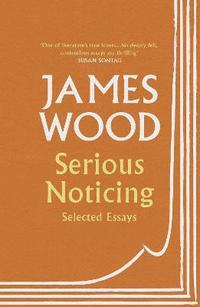 av James Wood
Häftad Engelska, 2019-11-07
135
Köp
Spara som favorit
Skickas inom 5-8 vardagar.
Gratis frakt inom Sverige över 159 kr för privatpersoner.
Finns även som
Visa alla 2 format & utgåvor
The selected essays of James Wood - our greatest living literary critic and author of How Fiction Works 'James Wood is a close reader of genius... By turns luscious and muscular, committed and disdaining, passionate and minutely considered' John Banville James Wood is one of the leading critics of the age, and here, for the first time, are his selected essays. From the career-defining 'Hysterical Realism' to his more personal reflections on family, religion and sensibility, Serious Noticing offers a comprehensive overview of his writing over the last twenty years. These essays offer more than a viewpoint - they show how to bring the eye of critical reading to life as a whole. 'James Wood is one of literature's true lovers, and his deeply felt, contentious essays are thrilling in their reach and moral seriousness' Susan Sontag
Visa hela texten

In the unspooling sentences and paragraphs of the many fine and often seriously dandy essays that follow in this collection . . . Wood shows himself a maestro of tone and inflection. His sustained close attention as he interrogates the writers he loves is genuinely something to behold -- Tim Adams * Observer * The two voices mingling in this collection give a beautiful, moving sense of the stakes of criticism as Wood has practiced it, vigorously, without interruption for 30 years... No modern critic has exerted comparable influence in how we read . . . Wood writes as if enmeshed in the text itself; registering shifts in point of view and perspective with seismographic precision -- Parul Sehgal * The New York Times Book Review * James Wood is one of literature's true lovers, and his deeply felt, contentious essays are thrilling in their reach and moral seriousness -- Susan Sontag Like all good critics, James Wood is a story-teller of the art of reading, recreating the experience on the page for us' -- Francis Spufford Critics like James Wood not only help readers to read but especially, perhaps, help the author as well -- Elena Ferrante James Wood is a close reader of genius... By turns luscious and muscular, committed and disdaining, passionate and minutely considered -- John Banville The most urgent and morally demanding critic around -- Guardian An authentic literary critic, very rare in this bad time... Wood is always urgent, lucid, and interesting -- Harold Bloom Wood writes more incisively than almost anyone producing criticism today. His ability to transform complex, anxious thought into lucid, exciting prose is everywhere present -- Janet Malcolm James Wood has been called our best young critic. This is not true. He is our best critic; he thinks with a sublime ferocity... To enter Wood's mind is to cross a threshold: from the reviewer commonplaces that pass for essay-writing into the intellectual daring that portends literary permanence -- Cynthia Ozick

James Wood has been a staff writer at the New Yorker since 2007. In 2009, he won the National Magazine Award for reviews and criticism. He was the chief literary critic at the Guardian from 1992 to 1995, and a book critic at the New Republic from 1995 to 2007. He has published a number of books with Cape, including How Fiction Works, which has been translated into thirteen languages.