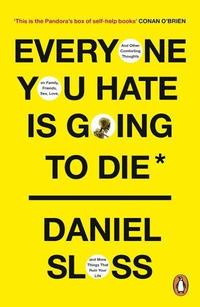 Everyone You Hate is Going to Die

And Other Comforting Thoughts on Family, Friends, Sex, Love, and More Things That Ruin Your Life

av Daniel Sloss
Häftad Engelska, 2022-05-05
112
Köp
Spara som favorit
Finns även som
Visa alla 2 format & utgåvor
'This is the Pandora's Box of self-help books.' - Conan O'Brien One of this generation's hottest and boldest young comedians, Daniel Sloss presents a transgressive and hilarious analysis of all of our dysfunctional relationships, and attempts to point us in the vague direction of sanity. Including lovers, ex-lovers, ex-lovers who you hate, ex-lovers who hate you, with parents, with best friends (male and female), not-best friends, with children, with siblings, and even with the global pandemic and our own mortality.
Visa hela texten

This is the Pandora's Box of self-help books. -- Conan O'Brien What a book. Smart, acerbic, and incredibly funny. I suggest you read it. -- Bob Saget The only thing wrong with this book is that at my age everyone I hate is already dead. -- Peter Bart Everyone You Hate... turns out to be a very enjoyable read, unsurprisingly. Written in the rhythm of a seasoned comedian's set, there are laughs liberally sprinkled, serious bits with elements of self-examination, and the impression that each carefully placed word has simply come to him in conversation. Just like any good Edinburgh show. -- Vicky Nangle * Beyond The Joke * Sloss offers insights on toxic masculinity, gender and sexuality that are at once deliciously dark, hilarious and profound. -- Debbie Hall * Daily Record *

Daniel Sloss finds About the Author descriptions wanky and outdated. He would just like you to watch his fucking comedy specials. The publisher, on the other hand, would like you to know that Daniel Sloss is an internationally acclaimed, award-winning Scottish comedian and writer. He has created eleven solo shows, toured them in theatres, music venues, and arenas across fifty countries to rave reviews, and his specials, including X on HBO as well as Dark and Jigsaw, on Netflix, can be seen in a total of 190 countries. Despite the relationship and marital mayhem he has caused, Sloss still believes in love. Sloss was born in 1990 and lives in Scotland, his 'forever home'.