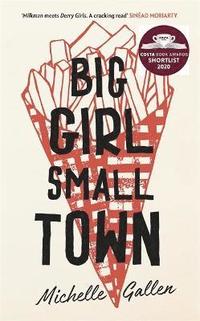 av Michelle Gallen
Inbunden Engelska, 2020-02-20
215
Köp
Spara som favorit
Finns även som
Visa alla 2 format & utgåvor
SHORTLISTED FOR THE COSTA FIRST NOVEL AWARD SHORTLISTED FOR THE IRISH BOOK AWARDS NEWCOMER OF THE YEAR SHORTLISTED FOR THE COMEDY WOMEN IN PRINT PRIZE 'Milkman meets Derry Girls. A cracking read' Sinead Moriarty 'A thrillingly fresh, provocative and touching voice' Marian Keyes 'Bawdy yet beautiful, full of everyday tragedy, absurdity and truth. I grew extraordinarily attached to Majella' Sara Baume Routine makes Majella's world small but change is about to make it a whole lot bigger. *Stuff Majella knows* -God doesn't punish men with baldness for wearing ladies' knickers -Banana-flavoured condoms taste the same as nutrition shakes -Not everyone gets a volley of gunshots over their grave as they are being lowered into the ground *Stuff Majella doesn't know* -That she is autistic -Why her ma drinks -Where her da is Other people find Majella odd. She keeps herself to herself, she doesn't like gossip and she isn't interested in knowing her neighbours' business. But suddenly everyone in the small town in Northern Ireland where she grew up wants to know all about hers. Since her da disappeared during the Troubles, Majella has tried to live a quiet life with her alcoholic mother. She works in the local chip shop (Monday-Saturday, Sunday off), wears the same clothes every day (overalls, too small), has the same dinner each night (fish and chips, nuked in the microwave) and binge watches Dallas (the best show ever aired on TV) from the safety of her single bed. She has no friends and no boyfriend and Majella thinks things are better that way. But Majella's safe and predictable existence is shattered when her grandmother dies and as much as she wants things to go back to normal, Majella comes to realise that maybe there is more to life. And it might just be that from tragedy comes Majella's one chance at escape.
Visa hela texten

A thrillingly fresh, provocative and touching voice * Marian Keyes * Milkman meets Derry Girls. A cracking read * Sinead Moriarty * Bawdy yet beautiful, full of everyday tragedy, absurdity and truth. I grew extraordinarily attached to Majella * Sara Baume * Wild and engrossing . . . unexpected and wonderful * Roddy Doyle, Irish Times * The funniest debut I've ever read * Claudia Carroll * I loved Majella from the first page . . . Utterly brilliant and deliciously hilarious! With humour, wit and beauty, Gallen subtly unveils a violence and conflict that lies beneath, exploring the legacy of the Troubles and the deeply felt effects through generations * Christy Lefteri * What a voice: I felt as though I knew Majella intimately by the end . . . Big Girl, Small Town is a darkly hilarious novel about small-town life, which manages to be wildly entertaining despite being mostly set in a chip shop - a fine place in which to loiter with such a filthy, funny, clever companion * Guardian * It's the humour, dry and gritty, that sets Big Girl, Small Town apart . . . to think that this is Michelle Gallen's debut is astonishing, as Majella's narration is bold and assured . . . evocative, caustic and compelling * Sunday Business Post * Northern Ireland is currently producing more exceptional writers per square inch than possibly anywhere else . . . Michelle Gallen will most certainly earn her place in the honours list. Big Girl, Small Town is even funnier than Derry Girls, while being just as fraught as Anna Burns's Booker Prize winner * Sunday Independent * A winning evocation of a small Irish community whose people burst from its pages. Engaging and satisfying * Daily Mail * Superb * Irish Examiner * Captivating . . . a confident debut with a very memorable protagonist in Majella * Irish Times * Darkly funny * Mail on Sunday * Gallen's debut deserves comparisons with Anna Burns' Milkman for its depiction of the impact of the Troubles on a vulnerable young woman but this terrifically imagined tender black comedy is very much its own book * Metro * Charming . . . there is an easy warmth to Big Girl, Small Town * Sunday Times * Gallen's unrelenting eye for the bizarre and Coughlan's talent for deadpanning make it an absolute winner * Financial Times * Sensational . . . Gallen's effortless immersion into a gritty, endlessly bittersweet world packs a dizzying punch * Publishers Weekly (starred review) * An irreverent portrait of small-town Northern Ireland that is both bleakly and uproariously funny * Kirkus * Majella is a nuanced and complicated heroine, reliant on routines and largely dismissive of change. Infused with local diction, inflection, and slang, her voice envelops readers in the sounds of small-town Ireland * Booklist (starred review) * Majella is a compelling character caught in a fascinating slice of time, and her journey is exquisitely rendered. With echoes of Gail Honeyman's Eleanor Oliphant Is Completely Fine crossed with the 1990s-set British sitcom Derry Girls, this debut is recommended for fans of Ottessa Moshfegh, Emma Donoghue, and Sally Rooney * Library Journal (starred review) * Hugely charming * Irish Independent * [A]n inventively foulmouthed gem of a novel . . . a novel that is, above all, an intimate portrait of a peculiar - and peculiarly resilient - woman who is fated to notice everything and forget nothing * Wall Street Journal * An immensely lovable debut novel * Washington Post * Gallen's darkly comic debut is an unforgettable portrait of a young woman whose rich internal life offers a brilliantly observed commentary on her bleak surroundings * Daily Mail *

Michelle Gallen was born in Tyrone in the 1970s and grew up during the Troubles a few miles from the border. She studied English Literature at Trinity College Dublin and Publishing at Stirling University. She has had work published in the Stinging Fly, Mslexia and others and won the Orange/NW Short Story Award. Big Girl, Small Town was shortlisted for the Costa First Novel Award, the Comedy Women in Print Prize and Newcomer of the Year at the Irish Book Awards.