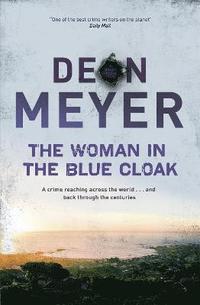 The Woman in the Blue Cloak

av Deon Meyer
(4 röster)
Häftad Engelska, 2018-10-04
159
Bevaka
Spara som favorit
Bokens leverantör håller tillfälligt stängt på grund av Coronapandemin. Klicka "Bevaka" för att få ett mejl när boken går att beställa igen eller välj ett annat format nedan.
Finns även som
Visa alla 3 format & utgåvor
From the author of Thirteen Hours - A Sunday Times '100 best crime novels and thrillers since 1945' pick The Woman in the Blue Cloak is a brilliant novella which will thrill and entertain fans of Deon Meyer's much-loved detective Benny Griessel. Benny Griessel is a cop on a mission: he plans to ask Alexa Bernard to marry him. That means he needs to buy an engagement ring - and that means he needs a loan. So Benny has a lot on his mind when he is called to a top-priority murder case. A woman's body is discovered, naked and washed in bleach, draped on a wall beside a picturesque road above Cape Town. The identity of the victim is a mystery, as is the reason for her killing. Gradually, Benny and his colleague Vaughn Cupido begin to work out the roots of the story, which reach as far away as England and Holland... and as far back as the seventeenth century.
Visa hela texten

Deon Meyer is not just South Africa's greatest crime writer, he's up there with the best in the world * The Times * Tells a cracking story and captures the criminal kaleidoscope of a nation. * Times Literary Supplement * The narrative is well-plotted, and the novel brings to life the rich and volatile diversity of contemporary South Africa. There's nothing flashy here, just a good story, very well told. Would there were more like it. * Spectator * Crime fiction with real texture and intelligence. * Independent * One of the best crime writers on the planet * Daily Mail * Praise for Deon Meyer's Benny Griessel series * - *

Bloggat om The Woman in the Blue Cloak

Deon Meyer lives near Cape Town in South Africa. His big passions are motorcycling, music, reading, cooking and rugby. In January 2008 he retired from his day job as a consultant on brand strategy for BMW Motorrad, and is now a full time author. Deon Meyer's books have attracted worldwide critical acclaim and a growing international fanbase. Originally written in Afrikaans, they have now been translated into twenty-eight languages. THIRTEEN HOURS was shortlisted for the CWA International Dagger and won the Boeke Prize in South Africa - the first time in the prize's 16 year history that a South African book has won. His novels have also won literary prizes in France, Sweden, Germany and the Netherlands, and the film rights to seven of his novels have been optioned or sold. Deon has also written two television series, and several screenplays for movies. In 2013 he directed one of his original scripts for the feature film The Last Tango. Visit the author's website at www.deonmeyer.com and follow him on Twitter @MeyerDeon