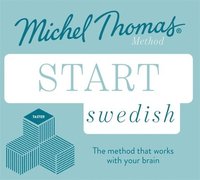 av Roger Nyborg, Michel Thomas
CD-bok Engelska, 2019-05-30
139
Köp
Spara som favorit
Skickas inom 7-10 vardagar.
Gratis frakt inom Sverige över 159 kr för privatpersoner.
'The thrill is that you're actually figuring it out on your own. You're engaging with another language, not just parroting it... It's an excellent way to start, and leaves the listener thinking, Hey, Ich kann do dis.' - New Yorker, David Sedaris, humorist and author, on learning German with the Michel Thomas Method Looking for a convenient language course that fits your lifestyle and gets you speaking a new language in a matter of weeks, not years? The original no-books, no-homework, no-memorizing method is in tune with the way the brain prefers to receive, store and retrieve information. You'll stick with it because you'll love it. * Pick up Swedish naturally and unforgettably without strain or stress * Learn from listening and speaking, without the pressure of writing or memorizing * Build up your Swedish in manageable steps by thinking out answers for yourself * Progress to the full Foundation Swedish course with confidence in the method. WHY IS THE METHOD SO SUCCESSFUL? 'What you understand, you know; and what you know, you don't forget.' - Michel Thomas Before there was machine learning, there was Michel Thomas. For over 50 years he worked on decoding languages by breaking them down into their most essential component parts. These 'building blocks' are introduced to the learner sequentially in such a way that you reconstruct the language for yourself - to form your own sentences, to say what you want, when you want. This unique method draws on the principles of instructional psychology and works with the way your brain prefers to receive, store and retrieve information. Knowledge is structured and organized so that you absorb the language easily and don't forget it. The method is designed to eliminate the stress which prevents you from relaxing and allowing the brain to work in the way which accepts learning in a seemingly painless, very exciting and highly motivating way. HOW DO THE COURSES WORK? 'All stress inhibits true and effective learning' - Michel Thomas During the course, you will join Michel Thomas Method Teachers Roger Nyborg, Hakan Rosenqvist and two students in a live lesson, learning from both their successes and their mistakes to keep you motivated and involved throughout the course. You, as the learner, become the third student and participate actively in the class. Within the very first hour you will be able to construct simple phrases by listening and thinking out answers for yourself without the pressure of writing or stress of having to memorize. You will learn at your own pace, pausing and repeating where necessary, and complete the course in about 3-5 hours. WHAT WILL I ACTUALLY ACHIEVE? 'I am the architect who builds the house. It's up to you to decorate it.' - Michel Thomas The Michel Thomas Method will help you kick-start, continue, and flourish in your Swedish language learning journey. It is not intended to get you perfectly fluent, but it will get you speaking and using Swedish, with proper pronunciation, faster than most any other method. It is designed to give you a strong foundation and good working knowledge of a language from which you can expand and later 'add decoration' to. It is a rapid method for learning, but still requires effort and concentration on the part of the learner. WHAT'S INCLUDED IN THE COURSE?* Start Swedish includes one audio CD. The booklet is available to download from www.michelthomas.com. LEARN ANYWHERE AND ANYTIME! Reclaim your pockets of free time to learn a new language! Don't be tied to chunky books or your computer, Michel Thomas Method audio courses let you learn whenever and wherever you want, in as little or as much time as you have. WHERE DO I GO NEXT? Foundation Swedish follows on from the Start course.
Visa hela texten

Five minutes in and you already feel like you're winning * Time Out * Michel Thomas is a precious find indeed * Guardian * Works like a dream * Daily Telegraph * Thomas makes it simple * Sunday Times * The most extraordinary learning experience of my life -- Emma Thompson A unique and perfectly brilliant way of learning languages -- Stephen Fry The nearest thing to painless learning * The Times * I experienced the same sort of pleasure that you got from suddenly getting a crossword clue right or cracking a code...the finger-snapping moment of, Oh My God! I've just understood what you've said to me in Spanish or you've just understood me! -- Peter LOVSTROM I've used Michel Thomas to get off the starting block for French, Italian and Spanish and I'm always surprised by how much I can say after only a few hours of listening. The Michel Thomas Italian course organises verbs into logical groups which helps you pick them up fast. And perhaps more importantly, it shows you how to use this grammar to build useful sentences. -- Katie Harris * Joyoflanguages.com * 'The thrill is that you're actually figuring it out on your own. You're engaging with another language, not just parroting it... It's an excellent way to start, and leaves the listener thinking, Hey, Ich kann do dis.' -- David Sedaris * New Yorker *

Roger Nyborg has been teaching Swedish as a foreign and second language since 1969, both in Sweden and abroad, including for 25 years at Stockholm University. He has written several books for learning Swedish, both for beginners and more advanced students. Hakan Rosenqvist has taught Swedish for more than 40 years, to immigrants and university students, as a lecturer abroad and moreover in Swedish teacher training programmes. He has published material such as a course book on Swedish prepositions (Prepositionsboken), a pronunciation manual (Uttalsboken), a course in Swedish syntax (Syntaxboken). He is managing the oral part of the Swedish language academic entrance test, named Tisus, given twice a year at Swedish universities and at a number of institutions around the world. Michel Thomas (1914-2005) had an amazing life. Born in Poland, he spent his early years in Germany and then in France, where he studied psychology at the Sorbonne in Paris. When war broke out, he fought with the Resistance and suffered imprisonment in labour camps. At the end of the war he joined the US liberation army and later settled in the US where he established his world-famous language school. Languages, being his strength and passion became the focus of the next 50 years of his life that he spent developing a method that he hoped would change the way we teach and learn - so that everyone could succeed. He developed this method 'that works with the brain'. After creating several courses of his own, he passed on his method so that other teachers might use it too.