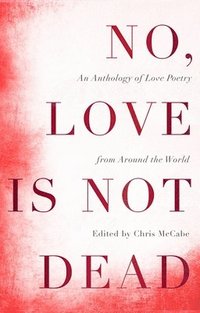 No, Love Is Not Dead

An Anthology of Love Poetry from Around the World

Chris McCabe is National Poetry Librarian at Southbank Centre's National Poetry Library, where he launched the Endangered Poetry Project in 2017, a major project to collect poetry written in the world's disappearing languages - the basis for his first anthology with Chambers, Poems from the Edge of Extinction (2019). Shortlisted for the Ted Hughes Award and the Republic of Consciousness Prize, his work has been described by The Guardian as 'an impressively inventive survey of English in the 21st Century'. His previously published work crosses artforms and genres including poetry, fiction, non-fiction, drama and visual art.