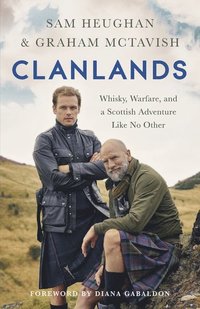 Whisky, Warfare, and a Scottish Adventure Like No Other

av Sam Heughan, Graham McTavish
(5 röster)  |  Läs 1 recension
Inbunden Engelska, 2020-11-03
248
Köp
Spara som favorit
Finns även som
Visa alla 3 format & utgåvor
THE SUNDAY TIMES BESTSELLER With a foreword by Diana Gabaldon. Two men. One country. And a lot of whisky. As stars of Outlander, Sam and Graham eat, sleep and breathe the Highlands on this epic road trip around their homeland. They discover that the real thing is even greater than fiction. Clanlands is the story of their journey. Armed with their trusty campervan and a sturdy friendship, these two Scotsmen are on the adventure of a lifetime to explore the majesty of Scotland. A wild ride by boat, kayak, bicycle and motorbike, they travel from coast to loch and peak to valley and delve into Scotland's history and culture, from timeless poetry to bloody warfare. With near-death experiences, many weeks in a confined space together, and a cast of unforgettable characters, Graham and Sam's friendship matures like a fine Scotch. They reflect on their acting careers in film and theatre, find a new awestruck respect for their native country and, as with any good road trip, they even find themselves. Hold onto your kilts... this is Scotland as you've never seen it before.
Visa hela texten

'A breath of fresh Scottish air in lockdown, it's one to stick in your sporran and consult when compiling your wishlist of places to escape to once restrictions are lifted.' * Scotsman Magazine * The "Outlandish" tour of Scotland with Sam Heughan and Graham McTavish is the armchair adventure we all need right now. * BBC Scotland * This book is full of anecdotes, history and hilarious interactions between the pair as they travel around Scotland in their trusty campervan. * Express * A breezy roadtrip full of banter between the chalk-and-cheese friends. * Sunday Post * For anyone who wants to know more about Scotland's past or hear the inner monologues of two fine gentlemen, this provides a warm and wicked adventure in a magical land. * Magic Radio Book Club * Their odyssey is self-deprecatingly styled as "the story of two men who know nothing". In fact, Heughan and particularly McTavish are keen students of Highland history * Scotland on Sunday * A joyously eclectic mix of historical trivia, travel diary and journey of self-discovery. * Scottish Field * The actors have a lovely dynamic, which is as enjoyable in the book as it promises to be in the upcoming TV series. * The People's Friend * Clanlands is a must for anyone who loves Scotland... a riotous, engaging and dynamic journey. * Dumfries & Galloway Life * 'It all comes across as fun-loving and tongue-in-cheek and that's what raises this book above the usual Scottish history/travel books that have become so prominent.' -- Cameron McNeish * Scots Magazine *

Sam Heughan is an award-winning actor and philanthropist, best known for his starring role as Jamie Fraser in the hit TV show Outlander. From his early days at the Royal Court Theatre, Sam has enjoyed a career in theatre, television and film spanning almost two decades. With his growing success and fame, Sam has also lent his voice and platform to raise funds and awareness for many notable charities, including Marie Curie UK and Blood Cancer UK. In recent years he has raised over $5 million for blood cancer research, hospice care and testicular cancer awareness education. Due to his outstanding contribution to charitable endeavours and artistic success he was bestowed by the University of Glasgow and the University of Stirling with an honorary doctorate in 2019. Graham McTavish has been acting for over 35 years in theatre, film and television. On film and TV he is best known for his roles as Dougal MacKenzie in Outlander, the fierce Dwarf Dwalin in The Hobbit trilogy, and AMC's cult show Preacher as the Saint of Killers. He has performed in theatre all over the world from the Royal Court Theatre in London to the Metropolitan Museum of Art in New York. He is delighted that the dream of his 12-year-old self to be a published author has finally come true!