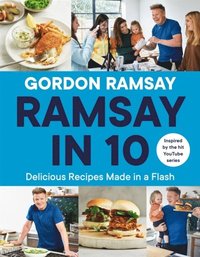 Delicious Recipes Made in a Flash

av Gordon Ramsay
Inbunden Engelska, 2021-10-14
289
Köp
Spara som favorit
Finns även som
Visa alla 1 format & utgåvor
'As an aid for batting away takeaway temptation and cooking from scratch, this cookbook's a winner.' - EVENING STANDARD 'Can you really knock up perfect lasagne, curry or sticky toffee pudding in just ten minutes? While Ramsay concedes that he cooks faster than most, he shows that speedy, delicious food is achievable for anyone.' - DAILY MAIL This is fine food at its fastest and fast food at its finest - 100 new incredibly delicious recipes, all clocking in at around 10 minutes. Inspired by his YouTube series, you'll be challenged to get creative in the kitchen and learn how to cook impressive, flavoursome dishes in no time. Whether you're looking to excite the whole family with a tasty One Pan Pumpkin Pasta or some Chicken Souvlaki, or you need something super quick to assemble, like Microwave Sticky Toffee Pudding - these are recipes guaranteed to become instant classics. Plus, with each time you cook, you'll get faster and faster with Gordon's shortcuts to speed up your cooking, reduce your prep times and get the very best from simple, fresh ingredients. 'When I'm shooting Ramsay in 10, I'm genuinely full of excitement and energy because I get to show everyone how to really cook with confidence. It doesn't matter if it takes you 10 minutes, 12 minutes or even 15 minutes, to me, it's about sharing my 25 years' of knowledge, expertise and hands-on experience, to make everyone feel like better, happier cooks.' - Gordon Ramsay Have fun and get cooking! Great food is only 10 minutes away.
Visa hela texten

Scottish by birth, Gordon Ramsay was brought up in Stratford-upon-Avon, England, and initially aspired to be a professional footballer. However, when an injury prematurely put an end to any hopes of a promising career on the pitch, Ramsay went back to college to complete a course in hotel management. His dedication and natural talent led him to train with some of the world's leading chefs. Now internationally renowned and holding seven Michelin stars, Ramsay has opened 34 restaurants globally including Europe, America, Asia and the Middle East. Ramsay has also become a star of the small screen in the US and UK, and earned himself an EMMY nomination in 2017. Ramsay has released a number of books, many of which have become bestsellers around the world; his latest cookbook is Quick and Delicious. A keen triathlete, Gordon lives with his wife Tana and five children, Megan, twins Jack & Holly, Tilly and newest member of the family, Oscar. He divides his time between London, Los Angeles and Cornwall.