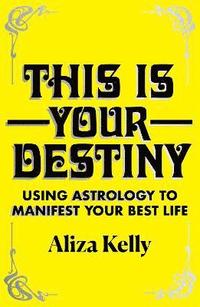 This Is Your Destiny

av Aliza Kelly
Inbunden Engelska, 2021-09-28
173
Köp
Spara som favorit
Finns även som
Visa alla 2 format & utgåvor
This Is Your Destiny fuses the wisdom of the stars, real-life stories and Aliza's knowledge to prove that reality is a reflection of consciousness, and by shifting your awareness you can transform your universe to create the life you've ALWAYS wanted. In This Is Your Destiny Aliza acknowledges that astrology isn't a quick fix. It's not about solving a problem and moving on. Everything - literally everything - is connected: Improving your romantic relationships is about renegotiating your self-worth. Achieving professional success is about cultivating an abundance-based mentality. Coping with life's most difficult circumstances is about building a rich spiritual inner-world. Chapters include Money Is Emotional, Hustle with Intention and Astrology and Manifestation.
Visa hela texten

Exploratory and introspective...useful, generative, and proactive. I will recommend it to anyone who wants to get their shit together. * Courtney Perkins, Creator of @NotAllGeminis * Aliza Kelly has masterfully captured the mystery and wonder of astrology as a tool for manifestation, and made it practical for your everyday life. * Jerico Mandybur, author of Neo Tarot: A Fresh Approach to Self-Care * Gives readers the gift of creating their destiny in a way that feels tangible, attainable and inspiring. * Gabriela Herstik, author of Inner Witch * If astrology is a language to help you understand yourself and the world around you, Aliza is its ultimate translator - insightful and full of heart. * Jessica Pels, Editor-in-Chief, Cosmopolitan *

As well as being an astrologer, Aliza Kelly is a columnist, the co-founder of an astrology-based dating app Align, the host of hit podcast Stars Like Us, a resident astrologer at Soho House, host of YouTube series Star Chart, as well as a content creator. She's the resident astrologer of Cosmopolitan and her monthly horoscopes and cosmic advice column reach an audience of 75M. In addition, she's the host of a new astrology-based dating show created by Amazon Prime. She's well-connected, has a growing Instagram and her meme-focused content is shared widely. Aliza has been featured in The New York Times, The New Yorker, Fast Company, The Drew Barrymore Show, E!, The Today Show, and The Cut, among many others. Aliza has authored two books, The Mixology of Astrology: Cosmic Cocktail Recipes for Every Sign (2018) and Starring You: A Guided Journey Through Astrology (2019), for young adult readers.