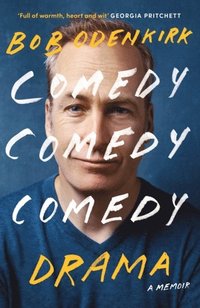 av Bob Odenkirk
Häftad Engelska, 2023-03-16
137
Bevaka
Spara som favorit
Ännu ej utkommen – klicka "Bevaka" för att få ett mejl så fort boken boken går att köpa.
Finns även som
Visa alla 2 format & utgåvor
*THE INSTANT SUNDAY TIMES & NEW YORK TIMES BESTSELLER* 'A real gem of a book for comedy fans... honest, irreverent and fascinating' Matt Lucas 'Bob Odenkirk is not only a brilliant comedy writer and performer, he is also a comedy fan. This book is a love letter to all his comedy heroes, full of warmth, heart and wit' Georgia Pritchett 'Bob is one of the sharpest comedy writers and actors working today. This is a wonderful memoir ... I devoured it in one sitting' David Walliams 'I loved this book. I was in a lift with Bob once, back in the 90s - little did I know how high he was going' Harry Hill ------------------------------------------------------------- In this hilarious, heartfelt memoir, the star of Mr. Show and Breaking Bad spin off Better Call Saul opens up about the highs and lows of showbiz, his cult status as a comedy writer, and what it's like to reinvent himself at age fifty as an action-film ass-kicker. Bob Odenkirk's career is inexplicable. And yet he will try like hell to explicate it for you. Charting a "Homeric" decades-long "odyssey" from his origins in the seedy comedy clubs of Chicago to a dramatic career full of award nominations-with a side-trip into the action-man world that is baffling to all who know him-it's almost like there are many Bob Odenkirks! But there is just one, and one is plenty. Bob embraced a life in comedy after a chance meeting with Second City's legendary Del Close, then somehow made his way to a job as a writer at Saturday Night Live. While surviving that legendary gauntlet by the skin of his gnashing teeth, he stashed away the secrets of comedy writing-eventually employing them in the immortal "Motivational Speaker" sketch for Chris Farley, honing them on The Ben Stiller Show, and perfecting them on Mr. Show with Bob and David. In Hollywood, Bob demonstrated a bullheadedness that would shame Sisyphus himself, and when all hope was lost for the umpteenth time, the phone rang with an offer to appear on Breaking Bad-a show about how boring it is to be a high school chemistry teacher. His embrace of this strange new world of dramatic acting led him to working with Steven Spielberg, Alexander Payne, and Greta Gerwig, and then, in a twist that will confound you, he re-re-invented himself as a bona fide action star. Why? Read this and do your own psychoanalysis-it's fun! Featuring humorous tangents, never-before-seen photos, wild characters, and Bob's trademark unflinching drive and humour, Comedy Comedy Comedy Drama is a classic showbiz tale told by a determined idiot. 'I can't think of another entertainer who has improbably morphed so many times and all through real genius and determination' Conan O'Brien 'An exceptionally and uniquely talented man who has had a huge influence on comedy for over thirty years. And now he's given us his P.O.V. of that journey. This book is filled not only with lessons on "making" "it" in "showbiz" but also regular old life lessons as well (including his killer recipe for "Granny's Sunday Loaf"). It's funny, informative, and like the author himself, disarmingly honest. I look forward to meeting him one day' David Cross
Visa hela texten

Bob Odenkirk is an Emmy-winning writer and Golden Globe-nominated actor, comedian, director, and producer. He got his start in improv comedy in Chicago and wrote for Saturday Night Live. He has starred in Nobody and AMC's Breaking Bad and Better Call Saul, and written and starred in the sketch comedy cult hit Mr. Show. He has written and produced a number of television shows. He was also a consultant on Tim and Eric Awesome Show, Great Job! and has directed three films.