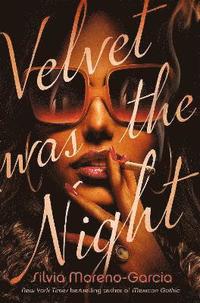 Velvet Was the Night

av Silvia Moreno-Garcia
Inbunden Engelska, 2021-08-17
209
Köp
Spara som favorit
Kan tyvärr inte längre levereras innan julafton.
Finns även som
Visa alla 8 format & utgåvor
1970s Mexico City: while student protests and political unrest consume the city, Maite seeks escape from her humdrum life in the stories of passion and danger filling the latest issue of Secret Romance. She is deeply envious of her neighbour, a beautiful art student apparently living the life of excitement and intrigue Maite craves - so when Leonora disappears under suspicious circumstances, Maite finds herself searching for the missing woman, journeying deep into Leonora's secret life of student radicals and dissidents. 'Cements Silvia Moreno-Garcia's incredible versatility as an amazing writer who moves between genres effortlessly. A lush, magnificent trip into a world of danger and discovery. Not to be missed!' S.A. COSBY, author of BLACKTOP WASTELAND But someone else is also looking for Leonora, at the behest of his boss, a shadowy figure who commands goon squads dedicated to squashing political activists. Elvis is an eccentric criminal who longs to escape his own life: he loathes violence and loves old movies and rock 'n' roll. Watching Maite from a distance, he comes to see her as a kindred spirit who shares his love of music and the unspoken loneliness of his heart. As Maite and Elvis come closer to discovering the truth behind Leonora's disappearance, they can no longer escape the dangers threatening to consume their lives, with hitmen, government agents and Russian spies all aiming to find or protect Leonora's secrets - at gunpoint. Velvet Was the Night: an edgy, passionate, simmering noir thriller from a writer at the very top of her game.
Visa hela texten

Velvet Was the Night cements Silvia Moreno-Garcia's incredible versatility as an amazing writer who moves between genres effortlessly. A lush, magnificent trip into a world of danger and discovery. Not to be missed! * S.A. COSBY, Anthony Award-winning author of BLACKTOP WASTELAND and RAZORBLADE TEARS, on VELVET WAS THE NIGHT * Silvia Moreno-Garcia's Velvet Was The Night is a treat to be savoured, a dizzying combination of American and Mexican Noir written in the most individual of voices. * BARRY FORSHAW, Financial Times, on VELVET WAS THE NIGHT * Velvet Was the Night is a rollicking work of historical noir with a vivid sense of time and place and an unforgettable cast. Moreno-Garcia made me care deeply about her characters and their dangerous, riveting misadventures. This is a stylish, hard-boiled novel painted in shades of grey with a whole lot of heart. * STEPH CHA, author of YOUR HOUSE WILL PAY, on VELVET WAS THE NIGHT * Silvia Moreno-Garcia takes you into the gritty underworld noir of 1970s Mexico City with a propulsive read where no one and nothing is as it seems. * ISABELLA MALDONADO, bestselling author of THE CIPHER, on VELVET WAS THE NIGHT * Velvet Was the Night is a delicious, twisted treat for lovers of noir. Silvia Moreno-Garcia is a who pulls you into her dark world and never lets you go. From the suspenseful, slow-burn plot to the crisp, desperate characters, you will be obsessed. * SIMONE ST. JAMES, New York Times-bestselling author of THE SUN DOWN MOTEL, on VELVET WAS THE NIGHT * Moreno-Garcia keeps the suspense high and the action intense, all while sharing a bit of 1970s Mexican history in this perfectly pitched novel. Fans of Moreno-Garcia's other novels will relish this title, as will noir aficionados and readers who like stories about everymen - and women - rising to the occasion * LIBRARY JOURNAL (Starred Review) on VELVET WAS THE NIGHT * Moreno-Garcia, the author of acclaimed and bestselling speculative novels, including Mexican Gothic (2020), returns to noir crime fiction with a winner that brings together a romance-fiction obsessed secretary and a lovelorn enforcer during the brutally suppressed student riots in 1970s Mexico City. Their stories of danger and passion run side by side in an enveloping narrative that is at once dark and bright. Despite their failings, readers will be rooting for them and hoping they find some happiness, and, maybe, even, each other. * BOOKLIST (Starred Review) on VELVET WAS THE NIGHT * It's hard to describe how much fun this novel is - Moreno-Garcia, whose Mexican Gothic (2020) gripped readers last year, proves to be just as good at noir as she is at horror. The novel features memorable characters, taut pacing, an intricate plot, and antiheroes you can't help but root for. A noir masterpiece. * KIRKUS (Starred Review), on VELVET WAS THE NIGHT * A rich novel with an engrossing plot, distinctive characters, and a pleasing touch of romance. Readers won't be able to put it down. * PUBLISHERS WEEKLY, (Starred Review), on VELVET WAS THE NIGHT * A chameleon writer with incredible writing skills * KIRKUS * A genre-jumping wizard, one of the most exciting and necessary authors writing today * CHARLIE JANE ANDERS, award-winning author of The City in the Middle of the Night * You'll be pulled into the tale with spies, romance, danger and rock 'n' roll * NEWSWEEK MAGAZINE * Sexy and simmering * E! ONLINE * Pacy enough to keep you hooked - as it reaches its climax, so will your heart rate * Cosmopolitan * A page-turning read full of colour and action * THE INDEPENDENT * Within this rich world and character is a tense thriller that builds as the book reaches its climax... touches of John Le Carre espionage * SFBOOK REVIEWS * An evocative historical crime noir that quietly simmers with underlying danger and suspense * CULTUREFLY * An enthralling tale that's as fun as it is mysterious... The characters are fascinating, the tone lush and romantic, and it's all wrapped up in a mystery wi

Silvia Moreno-Garcia is the multi-award-winning author of Mexican Gothic (a New York Times bestseller), Gods of Jade and Shadow (one of Time magazine's top 100 fantasy novels of all time), among others, The Beautiful Ones, Certain Dark Things and the forthcoming noir thriller Velvet was the Night, She has also edited several anthologies, including the World Fantasy Award-winning She Walks in Shadows (a.k.a. Cthulhu's Daughters). Born and brought up in Mexico, she now lives in Vancouver, Canada.