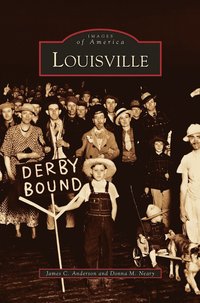 av Prof James Anderson, Donna M Neary, Donna Neary
Inbunden Engelska, 2001-11-01
309
Köp
Spara som favorit
Since its founding at the Falls of the Ohio by George Rogers Clark in 1778, Louisville and its people have looked to the mighty Ohio River as the city's lifeblood. Louisville has counted on the river for transportation, commerce, leisure, culture, and natural beauty. Characterized by abundant opportunity-both professional and recreational-this renowned city has grown and prospered to become the business and industrial center of Kentucky. Is Louisville the southernmost midwestern town, or is it an upper south, southern city? This identity crisis has arisen from a historical diversity of people, industries, architecture, and commerce. Louisville has been home to large populations of German, Irish, French, and other immigrants. Large multi-national corporations, such as General Electric, Brown Forman, Philip Morris, and UPS have also called Louisville home over the years. The city counts among its famous sons William Clark, who, with Merriwether Lewis, led the Lewis and Clark Expedition in 1803, and sports icon Muhammad Ali. Local streets boast modern architectural treasures such as the Humana Building, designed by Michael Graves, and the American Life Building by Mies van der Rohe. Louisville is also home to Churchill Downs and the country's premier equestrian competition, the Kentucky Derby. These and many other notable facets of the city's rich heritage are illuminated in the vintage photographs within this volume. Concentrating on the early twentieth century, Images of America: Louisville celebrates a dynamic community and the people, both famous and everyday, who have contributed to its lasting legacy.
Visa hela texten