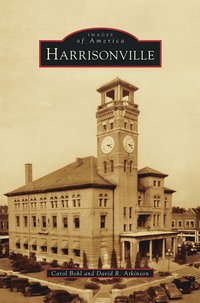 av Carol Bohl, David R Atkinson
Inbunden Engelska, 2012-11-26
319
Köp
Spara som favorit
Skickas inom 5-8 vardagar.
Fri frakt inom Sverige för privatpersoner.
Harrisonville, founded in 1837, is one of the oldest towns in western Missouri. Situated just south of Kansas City, it served Cass County as the center of government, commerce, and cultural life for over 150 years. Its geographic proximity to the Kansas border brought conflict and bloodshed during the Bleeding Kansas and Civil War eras, from 1854 to 1865, as jayhawkers and bushwhackers raided, looted, and terrified local citizens. After the war, four railroads brought new settlers and business opportunities. The town flourished as the center of a rich agricultural region and touted businesses, including a brickyard, a foundry, and several mills. Victorian brick buildings sprung up around the square from the 1880s to the early 1900s. The Italianate Cass County Courthouse, designed by W.C. Root, crowns the square as an architectural gem. In the 20th century, shoppers flocked to the town for business and pleasure. The square retains a high degree of architectural significance and is listed in the National Register of Historic Places.
Visa hela texten