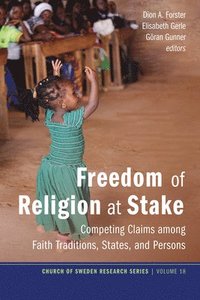 Freedom of Religion at Stake

av Dion A Forster, Elisabeth Gerle, Goeran Gunner
Häftad Engelska, 2019-11-01
390
Köp
Spara som favorit
Finns även som
Visa alla 2 format & utgåvor
How can freedom of religion protect the dignity of every human being and safeguard the well-being of creation? This question arises when considering the competing claims among faith traditions, states, and persons. Freedom of religion or belief is a basic human right, and yet it is sometimes used to undermine other human rights.

This volume seeks to unpack and wrestle with some of these challenges. In order to do so scholars were invited from different contexts in Africa and Europe to write about freedom of religion from various angles.

How should faith traditions in a minority position be protected against majority claims and what is the responsibility of the religious communities in this task? When does the state risk overstepping its boundaries in the delicate balance between freedom of religion and other human rights? How can new voices, who claim their human rights in relation to gender roles, reproductive rights, and as sexual minorities, be heard within their faith traditions? These are some of the questions that are raised by the authors.

This is a book for all who are engaged in faith communities, leaders as well as people trying to be recognized. It is also important reading for all interested in international legal frameworks for freedom of religion, state advisers, and human right defenders.
Visa hela texten

""if secularism fears religion for its threats to freedom, religions have reason to fear the inverse threat of secular stereotypes. yet religion represents as irreducible a multiplicity as do the modes of modern secularization. with its brilliant plurality of african and european voices, this volume probes key entanglements of power, ethics, and faith. it constructively illumines the tensions not only between conservative and progressive theologies but between reactionary nationalisms and liberal pluralisms."" --catherine keller, drew university, author of political theology of the earth: our planetary emergency and the struggle for a new public

""this volume brings readers, students, and scholars to a more nuanced knowledge of what religious freedom might mean, specifically highlighting how the very concept of religious freedom can oppress and marginalize minority positions within main religions. the volume gives a rare combination of concrete and critical case studies from both the south and north, as well as new and challenging theoretical reflections."" --trygve wyller, university of oslo

""this book will help the reader grapple with the issue of what is really meant by justice for all and for creation. people of faith, academics, and politicians are challenged . . . to widen the conversation to include freedom from religious abuse within faith traditions and from impinging the human rights of some individuals and the earth."" --isabel apawo phiri, world council of churches