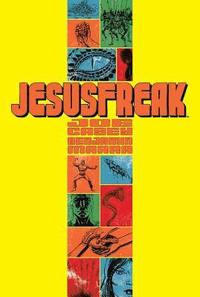 "Take some kung-fu, mix in a little 70s exploitation films, stir some of the Bible, and you get Jesusfreak, a gonzo take on Jesus Christ."--Graphic Policy "Jesus Christ has been written as the son of God, a messiah, and sometimes just a simple carpenter. But in the ... Jesusfreak, he has been reimagined - 'rebooted' even, to borrow a comic book term - as something utterly different (and possibly sacreligious): action hero. Writer Joe Casey, artist Benjamin Marra, and colorist Brad Sampson's dramatic new take on the biblical hero has him Ric Flair-chopping his enemies, kicking evil in the face, and backflipping like a ninja."--Newsarama "[A] reverent portrayal of Jesus, his doubts and his fears. There's a somber core under the garish, grindhouse colors-the highlight of the book comes not in an action scene or some display of almighty vengeance. Instead, the best, most meaningful moment is one in which we see the cost of Jesus' miracles as a toll upon his physical form. It's a profound notion, one that hit me with more meaning than I received from the last time I stepped inside a church."--WMQ Comics "Partially inspired by the martial-arts comics craze of the '70s, Jesusfreak reimagines Jesus' journey as a Bruce Lee-style combat gauntlet, with blood to spare."--Paste Magazine "Joe Casey and Benjamin Marra retell the story of Jesus in a manner that is less interested in adhering to religious canon as it is paying tribute to the 1970s comic work of creators like Paul Gulacy, Frank Miller and Doug Moench. The result is something unique, experimental and utterly fascinating."--The Hollywood Reporter "Wild and wooly and somehow still holy, too. What a blast." --Victor LaValle, The Ballad of Black Tom