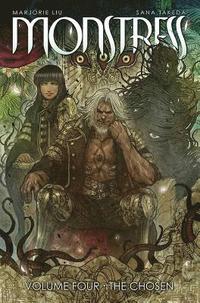 "Marjorie Liu and Sana Takeda take eastern and western comics storytelling traditions and styles, and create something wholly their own and remarkable: a beautifully told story of magic and fear, inhumanity and exploitation, of what it means to be human and the monsters we all carry inside us. Also, some of the best cats in comics. A delight." -Neil Gaiman "Liu's accomplishment is impressive. She's created characters who feel larger than life, but whose motivations and values are almost always obscure." -NPR "Liu and Takeda have created a vivid, dynamic world, sort of a steampunk Asia of a century ago, and populated it with sharp characters and an intricate mythology that incorporates gods, monsters and everything in between. Female characters dominate Liu's story line - which unfolds bit by bit like a novel through Takeda's gorgeous sequential panels-and touches on themes of race, war, duality, friendships and the meaning of family. In all my decades of reading comics, I've never seen anything quite like Monstress, and even though it falls in the category of epic fantasy, it also confirms my suspicion that sarcastic cats are secretly in charge of everything." -The New York Times "If you want big, beautiful, terrifying, violent magic, Monstress is your next favorite comic." -Cosmopolitan "...as ambitious as George R.R. Martin or J.R.R. Tolkien..." -The Los Angeles Review of Books "Monstress mixes steampunk and fantasy in the best way." -Complex