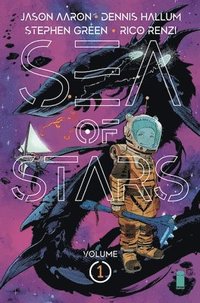 Sea of Stars Volume 1: Lost in the Wild Heavens

av Jason Aaron, Dennis Hallum, Stephen Green, Rico Renzi
Häftad Engelska, 2020-02-04
169
Köp
Spara som favorit
Skickas inom 5-8 vardagar.
Gratis frakt inom Sverige över 159 kr för privatpersoner.
"LOST IN THE WILDS OF HEAVEN" Being a space-trucker sounds like a cool job, but the reality is can be boring as hell. So when recently-widowed GIL gets a long-haul gig across the universe, he figures it's safe enough to bring his young son KADYN along for the ride - that is until their "big rig" gets bitten in half by a gigantic Space Leviathan! Now separated from his young son - with a breached suit that's venting oxygen at an alarming rate - Gil must defy the odds and stay alive long enough to rescue Kadyn. Meanwhile, Kadyn seems to be getting all the help he needs from a talking Space Mon-key riding a Space Dolphin...or maybe it's the strange powers he's suddenly manifest-ing?! From the writing duo of JASON AARON (SOUTHERN BASTARDS, Thor) and DENNIS HOPELESS (Cloak & Dagger, Vader: Dark Visions), with dazzling art by STEPHEN GREEN (Hellboy & the BPRD) and cosmic colors by Rico Renzi (SpiderGwen) comes a brand-new science fiction series, with all the scope and heart of the THE NEVEREND-ING STORY crossed with imaginative weirdness of Miyazaki - an intense, galaxy-spanning adventure that's suitable for fans of all ages! COLLECTS SEA OF STARS 1-5
Visa hela texten

LIBRARY JOURNAL -- All-ages adventure and a savage battle for survival mix as a father and son, separated after a monster devours their spaceship, search the galaxy for each other. In the aftermath of the attack, Gil Starx is stranded, wounded, dangerously low on oxygen, and desperate to find his son, Kadyn, before the homing beacon in his helmet runs out of power. For Kadyn, being lost in space is a thrill, especially after exposure to an ancient artifact grants him amazing powers, including the ability to communicate with a space monkey and a space dolphin who quickly become his companions. When a mysterious woman named Dalla convinces Kadyn to accompany her to her home planet, his animal friends are suspicious-and rightly so, as it's soon revealed that Dalla's interest in Kadyn is self-serving and emphatically sinister. Collecting single Issues 1-5. VERDICT If Sam Peckinpah had directed a Pixar film, it would probably a lot like what coauthors Aaron (War of the Realms) and Hallum (Star Wars: Vader)